The road that was once thought to be the impossible 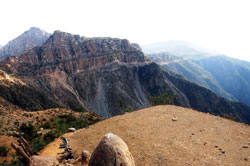 When we talk about historical sites we may be inclined to think about ancient ones. It is true that ancient historical sites might tell their stories about the activities and ways of living of our ancestors some hundred years back. However, there are some sites which are contemporary ones and still reveal historical achievements that human being could register and become extraordinary and take the attention of people and become modern day wanders. The Igla-Demhina road is one of these that reveals the historical achievements that Eritrea has registered so far.

The Igla-Demhina road might be very simple to talk about it for it is a road. To be physically there and see the landscape and the range of mountains it penetrates is another thing. The first impression that comes to the mind is that could any human being have the guts and the potential to do this, penetrating the seemingly very difficult terrain. It is said that the Italians had a plan to connect Adi-Keih with Foro through Igla-Demhina. They went to conduct a survey on the terrain and they concluded that it was impossible to penetrate the difficult cliffs and mountains and left it for some heavenly creatures to do the job, if at all possible. The believed impossible, however, was made possible by the construction heroes of Bidho Construction Company.
There is a saying that “If there is a will there is the way”. And with determination and strong will every thing is achievable.

Since the launching of the Warsai-Yikealo development campaign, the Government of Eritrea has been heavily engaged in constructing roads in different parts of the country. The Igla-Demhina  road that passes through the administrative areas of Igla, Mesogulo Zula, Safira, Sgr Resu, Karibosa, Gabarbaban and Abi Grat, in the Southern region, is very strategic road. The objective for building of the road is to provide the necessary social services to the villages located in the Eastern escarpments.

Looking from an angle of an onlooker the cliffs and the range of mountains seem human only could go through by means of flying objects. No way by foot or by vehicles. However, the unthinkable and the seemingly impossible has been penetrated.

The road is essential not only for the people living in the surrounding but also for promoting tourism industry in the country. With the completion of the road tourism network could be created linking Asmara, Serejeka, Shebah, Gahtelai, Massawa, Foro, Demhina, Igla, Adi-Keih and back to Asmara. This could also include the historical sites of Quohaito, Metera and Belew-Kelew. Isn’t this an interesting venture and adventure! We could make it in very few years time, and it something that investors could think about it in the coming meeting that it is scheduled to take place.