Endeavors being exerted to promote distribution and standard of health institutions: Minister 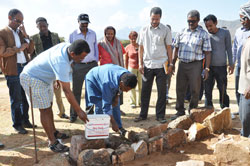 The Minister of Health, Ms. Amna Nur-Husein, said that the Ministry is exerting endeavors to promote distribution and standard of health institutions.

Keren, 1 November 2012 – The Minister of Health, Ms. Amna Nur-Husein, said that the Ministry is exerting endeavors to promote distribution and standard of health institutions. She made the statement at a ceremony connected with the launching of a community hospital construction project in Geleb semi-urban center for which she laid the cornerstone.

Reports indicate that the project is being implemented by Horn Construction Company. Dr. Kesetebirhan Solomon, head of the Health Ministry’s branch in Anseba region, said that the community hospital is due to reduce the demand for health service in the area, thus relegating child and mother mortality rate.

The Administrator of Geleb sub-zone, Mr. Teklebirhan Mihretab, pointed out that the sub-zone has more than 70,000 inhabitants including those leading nomadic style of living, and that the number of health institutions in the locality has not yet grown proportionally.

Among the inhabitants of the semi-urban center, Mr. Gebremariam Teklemichael and Mr. Adem Fikak Shiker voiced satisfaction with the launching of the project.

The school has already commenced rendering service by enrolling more than 900 students.