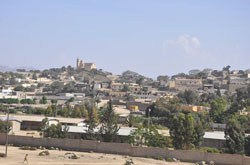 Let’s travel to the four directions of Eritrea. Villages, towns, semi-urban centers and major cities would tell stories of their own. What such places would tell is, of course, a story of success—success that has been registered in all domains of development drives. New schools, healthcare and educational institutions, new dams and bridges, roads networks of paramount importance, market places, bus terminals, small-scale industrial plants and the list goes rising high as one continues to travel around the country. “Had many places not been wildernesses?” one would ask. “Have many villages not grown into semi-urban centers?” another would echo a question. “Wasn’t this area a barren land?” a fellow passenger would wonder. “I couldn’t find the uneven ravens that used to disrupt exciting journeys” a passerby would pose a question for is very amused to see a number of places utterly changed.

Good distribution of healthcare facilities is what one who has been away from such areas could witness.  There are three healthcare centers, and three other healthcare institutions in Segeneyti sub-zone which enabled the inhabitants of the sub-zone gain good healthcare services in their respective vicinity. Any healthcare issue is now addressed for effective and timely services have been rendered. People’s awareness towards making maximum use of the available healthcare services is a driving force to the gradual success that has been achieved so far. What the sub-zone has not fully addressed is the issue of maternity service for there is a number of mothers who continue to give births traditionally through the assistance of traditional midwife practitioners.

Ministry of Health, different associations within the sub-zone have been engaged towards meeting healthcare demands.”  Owing to such collective endeavors, there are ambulances in Digsa, Akrur, Engela, and Hielo and it needs to be clear that, there is no deficit of transportation facilities even in the remotest area around Halay. Besides, there is also no deficit of medicine supply throughout the sub-zone.

In areas around Segeneyti sub-zone, the rainy season of 2012 has started earlier in March and continued in fair amount in April. Thus, the early rain has contributed to the good growth of varied yields.  When compared to that of last year’s, there was good amount of rain in this year’s summer time. As the sowing of some crops greatly depend on the amount of the early rain, the starting of the rainy season in March had already signaled the abundance of a variety of yields. As there was good amount of rain in the summer time, all villages of Segeneti sub-zone have plauged their farmlands sowed variety of crops in due time. Crops in the farmlands around Tsena-Degle were ripened earlier and mostly all sorts of yields are to be harvested in abundance. There are 6 major Dams and 8 micro-dams which would impact for the increase harvesting times.

Feeder roads are also playing vital role in inter-connecting the villages on the route from Digsa to Adi-keyih. A route that goes from Maereba through Mereta to Hazemo and another route that penetrates through Mai-seraw to Koatit are among the strategic feeder roads. With such like routes, 38 villages of the sub-zone are now connected via road networks. There is no village that is not connected to the main road via feeder roads. There is also another road that takes to Tsenea-Degle. Each village is connected with its neighboring village.

The Government may provide varied service rendering institutions, but what counts most is people’s awareness to make use of those services. Better access to education is among the major priorities of the Government, and every family is eager to send its children to the ever-growing number of academic institutions. There are 42 academic institutions in the sub-zone and 13 of which are kindergartens, 14 primary, 8 junior schools and 2 secondary schools in Segeneyti and Mai-seraw. Additional secondary school is also under construction. Despite the growth in the number of schools, it should be noted that there is deficits of teachers in all levels of academic carrier.

As part of securing sustainable provision of potable water for domestic and agricultural purposes, water reservoirs of varied sizes have been constructed everywhere in the country. According to Mr. Weldemichael, there is no village with shortage of potable water supply. There are 6 water distribution centers in Mareba, 8 in Digsa, and 6 in Akrur. All these distribution centers have been playing due role for sustainable supply of potable water. This time, more than 80% of the inhabitants of Segeneyti are gaining access to the provision of potable water via pipe lines. As the construction of residential houses is growing fast, the endeavors towards meeting a growing demand would persist.

There is Nothing Satisfactory than Innovating Based on your Inside Self