The ancient monastery of Bareknaha 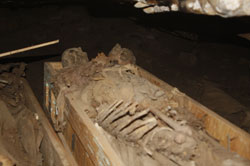 Eritrea which is believed to be the gate way for expanding Christianity in the region is rich of ancient monasteries. Almost all the monasteries have been founded by monks coming from Syria and other countries in the Middle East. One of these ancient monasteries if Bareknaha. The monastery of Bareknaha is located about seven to eight kilometers off the road from Senafe to Serha.

Bareknaha monastery is located amidst rocky mountains with very thick forest and very inviting location to visit and stay long to enjoy the landscape. By only looking at the Church one could be reassured that the monastery is ancient and counterpart with of Ham and other monasteries in the country.

It is also a place where people go there to get cured from different diseases especially from mental problem with its Holy Water. There are people assigned to the place of the Holy Water and whenever people come for treatment they attend them. They have long robes and they tie the person with robe and drop them deep to the Holy Water for seven times and for seven days. If they get well they go home and if not they repeat the same procedure for another seven days.

According to the monks from the monastery, in the past many foreign tourists used to go to the monastery. It was after the coming of the Dergue regime of Ethiopia that the place

In Baraeknaha, like in many ancient monasteries in Southern region, there are mummies that their age is not yet known. The mummies are believed to be of the monks who established the monastery. They are in bad condition and on the verge of disintegration of their bodies.

The ancient monastery of Bareknaha is one of the wanders in the country worth of visiting. The monks and the people around the monastery are very hospitable ready to welcome visitors to their place. The landscape with its greenery and ragged mountains is very attractive and peaceful to spend some time in there.