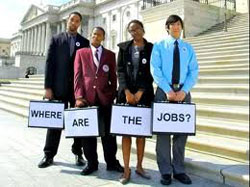 The continuing economic unpredictability and unsteadiness across the globe has exposed tons of young people to an extraordinary hardship. Unemployment, underemployment, socio-economic inequalities, poverty and exclusion and many other factors are and have been affecting the young generation, whose autonomy, dignity, well-being and access to rights are rapidly being warned away. As a result, a lot of countries around the world are risking  not only producing a “lost generation” of disillusioned young people, but also undermining their  political stability and social consistency, as well as their  long-term competitiveness and development prospects in the global economic  context. It is an undeniable truth that young people should be considered both as a key asset in the development of a country and they are the most vital subjects in a society to overcome the crisis. To advance and prosper, a country needs to reactivate intergenerational solidarity mechanisms and better political segment, social and economic power with the young generation. This definitely needs an improved support for and investment in young people through adequate policy choices and action.

If this is done then we could see an ensuring and smoother integration of young people into society through active citizenship, social dialogue, improved access to rights and sustainable employment. This notably requires strengthening youth policies and participation, fostering job creation, improving life-long learning opportunities and social protection, as well as stimulating youth entrepreneurship and building public-private partnerships between social partners.

All this could seem like an utopist vision of the world, but so long all of this will go on we might end up seeing worst scenarios than ever. Mainly because the economic collapse has implications far beyond the job market, since every aspect of daily life is to be wounded in so many ways. Having a big impact on everybody, especially the next generation, for the reason that if the economy slows down, they’re the ones who are going to have the toughest time finding a job.

Around the world, a generation is coming of age and finding nowhere to work. Globally, one in eight young people will be unemployed this year, according to a recent report by the International Labour Organization. That

adds up to 75 million jobless youths between the ages of 15 and 24: Six percent more than in 2007. The global youth unemployment rate this year has reached the 12.7 percent.

Youth joblessness is worst in the Middle East and North Africa, where one in four youths are unemployed, according to the report. But the downturn hit young people even harder in rich countries. The number of unemployed youths in wealthy countries spiked 27 percent between 2008 and 2011.

Many young people around the world are stuck in temporary, part-time, or low-productivity work, which diminishes their earnings prospects. About 30 percent of European youths are trapped in part-time jobs. American young people are facing similar scenarios, even if they have college degrees. Half of all recent college graduates in the U.S. lack a full-time job, according to a recent study by Rutgers. And nearly half of the recent college graduates that are employed are working in jobs that don’t require a college degree. And same goes to young people in Europe and mainly in the southern part where countries hit by the European debt crisis may be managing worse; in fact the youth unemployment rate has reached a staggering 51 percent in Greece and in Spain. In richer countries, a lack of investment in young people’s skills has contributed to increase unemployment statistics.

We could go with an even longer list of countries in which youngsters are having a hard time managing their lives. Even if there were different promises from different politicians and parties, the saddest thing is that so far nothing has been done and if it has been done something it was just partially. The youth is the most important implement of them all, but if young people and their potentials keep being crushed and ignored our world witness a lot of potential and talent going to waist.

It’s never too late to recover and bounce back. I think that is definitely about time to take action in supporting skills and give some space for the development for young people. Investing in young peoples’ expertise and abilities is a smart move for countries seeking to boost their economic growth.

There is Nothing Satisfactory than Innovating Based on your Inside Self