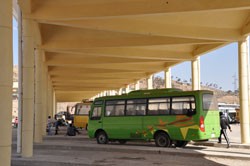 The inhabitants of the Southern region voiced satisfaction with the transport service being rendered by the Public Transport Center.

Mendefera, 6 November 2012 – The inhabitants of the Southern region voiced satisfaction with the transport service being rendered by the Public Transport Center.

Among the inhabitants, Ms. Rumana Mes’ud and Mr. Asefaw Habtemichael expressed satisfaction with the quality of transport service and the fair tariff.

Mr. Ahmed Ali-Shum, head of the Public Transport Center’s branch in the region, pointed out that more than half a million people are getting service by it on daily basis within the region along with 250 private buses. Moreover, he explained that the strengthening of management has made positive impact to this end.

Mr. Zerai Tekle, a driver, similarly voiced conviction that the move towards improvement of service quality has ensured customer satisfaction and harmony among workers of the Public Transport Center.

Ms. Meaza Tekle, a cash collector, said that the growing transport demand during special events could be met in line with the deployment of additional buses and enhancement of managerial capacity, and that the Center has created employment opportunities to 600 nationals.