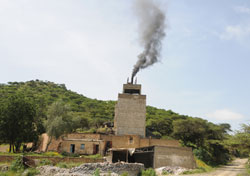 Mai-Ayni sub-zone has 14 administrative areas with a total population of around 55,000. The Mai-Ayni sub-zone is situated at 1500 meters above the sea level. Healthcare services is being delivered in three healthcare institutions that include a healthcare center, a community hospital and another healthcare institution that give services not only to the inhabitants of the sub-zone but also to other beneficiaries who flock there to gain healthcare access from different areas of the region. The most vivid achievement in the healthcare is the reduction of maternal and child mortality through the provision of efficient maternity service. Agricultural and other development undertakings have also been showing commendable progress.

“The assessment we conducted in 2011 shows us that there has been tremendous progress in the provision of healthcare service.  There is almost no occurrence of malaria as there has been effective prevention mechanism.” Dr. Haile Oqubamichaiel, director of Mai-Ayni Community Hospital Said “We also have an effective control mechanism to make sure that no child remains unvaccinated.”

In this sub-zone there is around 8000 hectare allocated for seasonal farm and more than 1000 hectares for permanent plantation. As there was sufficient amount of rain that started in June, most of the farmland has been cultivated. As compared to last year’s amount of rain, this year there was a wide distribution of rainfall throughout the sub-zone.

Agricultural experts in the sub-zone have been giving technical assistance. Mr. Zebib Kahsay, head of agriculture Ministry’s branch office in Mai-Ayni sub-zone said that besides the endeavors exerted to increase farmers knowhow on effective farm practices, the Ministry of Agriculture has been working to secure provision of fertilizers and select seed,

It is worth mentioning that all rivers of the Southern region such as Mereb, Gensel, Hadas, and other feeder rivers pass through this respective sub-zone. Such natural endowment coupled with the very fertile nature of soil texture has therefore enabled this sub-zone to be exceedingly a center of ample harvest as compared to the rest parts of the Southern region. As there are plans for the construction of varied water reservoirs, future agricultural output of the sub-zone would definitely increase. Fruits and vegetables harvest of Mai-Ayni sub-zone is incomparable in amount with those cultivated in other areas of the region. The Association of fruit and vegetable farmers of the sub-zone has more than 650 members who have been working hand in hand towards meeting the needed demand.

The ample agricultural outputs of the sub-zone have indeed enabled the farmers’ to be economically strong and thereby lead better lifestyle. The farmers of this sub-zone use different water sources for there are three dams namely Sesewe, Ona-Foron, and Kertsekemte and also 16 micro dams. Additionally, the farmers drill wells and make use of river streams. Since there is a plan to construct strategic dams, the prospect of agricultural output of the sub-zone is very promising.

Mai-Ayni sub-zone is also known for its livestock resources and hence is a market place where a number of people flock from different corners of the country to buy livestock from this area. This year’s good rainy season has also

Mr. Ghebrehiwet Fremichael, Chairperson of the association of fruits and vegetables farmers in Mai-Ayni sub-zone, highlighted that there is encouraging development in the cultivation of different plantations. The farmers of this sub-zone have been working hard towards boosting orange, papaya, and guava production. According to Mr. Ghebrehiwet, the Government has rehabilitated dairy farmers through offering cows for free and any member of the association has been beneficiary of oil supply at nominal price. But, any beneficiary is obliged to reproduce and freely distribute the cows to another beneficiary.

Apart from the provision of basic necessities, access to education is of a major concern for a normal development of communities anywhere else. Mr. Tsegay Birhane, head of Education Ministry’s administration and finance branch office in the sub-zone, said that as per the Government’s policy there should be at least one educational facility in all administrative areas.

What has been mentioned in the above is just the beginning of what is going to happen phase by phase in future development of the sub-zone.

Negative propaganda and its devastating effects on Africa’s development