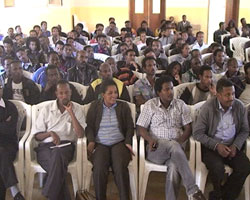 The Association of Youth Teachers in the Central region today held its 4th Assembly in Asmara city.

Asmara, 12 November 2012 – The Association of Youth Teachers in the Central region today held its 4th Assembly in Asmara city.

A report presented by Mr. Paulos Girmai, Chairman of the Association, indicated that it has registered considerable accomplishment as regards the strengthening of members’ role in nurturing competent students, besides promoting educational excellence and the sense of hard work.

Mr. Hager Ganzai, head of the NUEYS branch in the region, lauded the historical commitment of youths in the country’s ongoing development programs, and called on the Association to step up endeavors to this end.

The Assembly adopted its constitution and elected a committee that would serve for 2 years. It further called on members to play due role in the nation-building process.

Mr. Sultan Seid, Chairman of the NUEYS, pointed out that the meeting was a stepping stone towards invigorating the Association, and called for enhanced youth-teachers’ role.