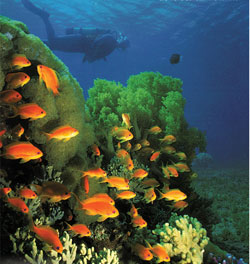 The Northern Red Sea region enjoys higher temperature of 50 degree cent grade and lower of 10 degree cent grade. The population of the region, according to the census made by the Regional Administration, reaches to 360,000. There is also diversity of ethnic groups living in the region which include Tigre, Tigrigna, Saho, Afar, Hidarib and Rashaida ethnic groups.

The livelihood of the inhabitants of the region is based on farming and pastoralism; people living in the highlands mostly depend from farming while people in the lowlands are either nomadic or fishermen. The Northern Red Sea is second largest region in the country with an area of 34,236 square kilometers, land length 450 and sea length 600 k. meters. The highest is 2,738 from sea level and the lowest 86 meters.

The region boarders with Southern, Southern Red Sea, Central, Anseba regions, the Red Sea, Ethiopia and the Sudan. The maxim of the region is “Mother of All Developments” for it holds

many ancient historical and archeological sites including Addulis and Buya (where it is believed to be the place of the first Homo sapiens); one of the first foundations of civilization and development; it possesses multiple historical and archeological sites; it is a gate way for local and international marine and air transportation; it possesses unpolluted sea shores and islands; it possesses favorable vast plain lands suitable for spite irrigation; and it enjoys spectacular landscapes like that of Eastern Escarpments, deserts, the mountains of Sahel, and stunning beaches.

The Read Sea region is also a region where we can find variety of wild animals including wild asses, antelopes, tigers, ostriches, gazelles, etc. There are also plenty of hot springs where we can develop spa tourism at May Wu’uy and Irafale. The Island of Delme, Buya archeological site, the ancient port of Marsa Fatma, Bordole, Ghedem Mountain, the natural steam at Irafale, Adulis-Zeila and the city port of Massawa are some among the many historical sites of the region.

There are also varieties of sea birds which some migrates and some stay permanently there. The Red Sea shores and the islands are very suitable for eco-tourism. Sunbathing, Snorkeling and Scuba Diving, Bird Watching, Marine Turtle and Dugong, Dolphin and Whale Watching are among the eco-tourism sectors that could attract many local and international tourists. The landscape including the Eastern Escarpments, the sand, the coral reefs, the islands and peninsulas are very spectacular that could attract visitors.