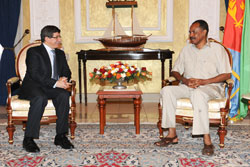 The two sides conducted in-depth discussion on bilateral relations and developments in the Horn of Africa.

As regards development of relations of partnership, they discussed ways and means whereby Turkish companies could operate in Eritrea and research regarding the shared history of the two countries could be conducted in the context of the prevailing inter-cultural ties between the people of both countries.

In connection with developments in the Horn region and security matters, President Isaias pointed out that Eritrea supports Turkey’s constructive role in ensuring peace and stability in the Horn.

Following the meeting, the Turkish Foreign Minister told Erina that the two sides exchanged views on ways of promoting stability in the Horn of Africa vis-à-vis enhancing the economies of the respective countries. Mr. Ahmet Davu Toglu further asserted that his country would strive to develop the existing bilateral ties with Eritrea, as well as foster peace and security of the region on the basis of partnership with the concerned states.

The Turkish delegation headed by the country’s Foreign Minister arrived in Asmara in the morning hours today and left latter in the afternoon.