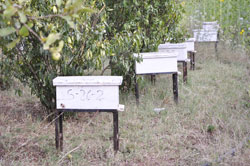 Being favorable for the cultivation of varied cereal crops, which is very common in highland areas, Adi-keyih sub-zone has 6,362 hectares of cultivable farmland. The 230 hectares of the overall farm areas has been put under cultivation utilizing water sources of 15 dams and 23 micro-dams. These farm areas have indeed been highly significant in satisfying demands of the sub-zone and other parts of the country. Even though most of the farm activities of this sub-zone have been confined to vegetables production, there are some developing fruits plantation areas. So, the water reservoirs constructed in this sub-zone have impounded sufficient amount of water that could be utilized in farm activities in 2012.

Apart from agricultural undertakings, Adi-keyih sub-zone is most known for pastoralism. The geographical shape of the area is rather conducive for pastoralism activities which outweigh the overall agricultural activities. As there is a growing activity of dairy farming, the sub-zone have been producing adequate amount of milk that could suffice the entire sub-zone. At times, Mr. Solomon Meles, head of Agriculture Ministry’s branch office in the sub-zone, said that besides satisfying the sub-zone’s demand, dairy production of Adi-keyih has been distributed to Senafe. There is also a growing number of livestock.

What is more is that, as part of the comprehensive agricultural activities that has been conducted in the sub-zone, around 304,000 tree seedlings have been planted. This reforestation program would soon impact beekeeping activities that have been extensively expanded throughout all villages of the sub-zone. The beekeeping activities not only satisfied the market areas of the sub-zone, but Mr. Solomon said that some of the honey production has been exported to different countries.

According to Mr. Solomon, some inhabitants of the sub-zone earn their living solely relying on beekeeping activities and it is quite normal to see individuals having up to 50 beehives. Bearing in mind that beekeeping has improved the living standards of the inhabitants, the utilization of pesticides and other chemicals have been strongly controlled to protect from hazardous impacts and thereby to improve honey production.

While the hospital and a healthcare center are inside Adi-keyih city, the other healthcare institutions are evenly distributed to other areas of the sub-zone. Hence, the rest healthcare

institutions are in Tekonda’e, Hawatsu, Safira, and in Der’a. According to Dr. Bahabolom Michael, Medical Director of Adi-Keyih hospital, with the exception of general and ophthalmic surgeries, all sorts of medial treatments have been effectively rendered in the hospital. Owing to the presence a specialists, the hospital offers prenatal and antenatal medial services as well as conducts obstetrical surgeries.

Commendable development has also been registered in the education sector. In the Adi-Keyih sub-zone there are 12 primary schools that educate students in Tigrigna and 9 others that teach in Saho language, 8 junior schools and 3 secondary schools. Besides, 11 kindergartens are evenly distributed throughout the sub-zone.

This time, a new primary school has been constructed and additional classes have been built for Adi-keyih secondary school and a junior school has been also set up in Emba-Kakat. What is very encouraging is that along the construction of new schools, there is ever-growing number of students. Roughly, there are about 16,000 students who have been perusing their educational carrier from primary through secondary schools. As regards the growing participation of students in educational carrier, Mr. Zayid Tekle, head of Education Ministry’s branch office, said that there has been a growth in the number of students annually.