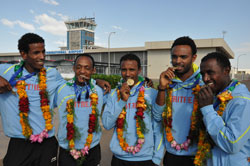 The history of cycling in Eritrea goes back to the time of the coming of the Italians. It is one of the Eritrea’s lasting influences of the colonial rule. Even though nationals were not allowed to participate, cycling competition began in 1946, what was then called Corso (Competition).

During the colonial rule cycling teams were set up, though dominated by Italians, for both entertainment and sports purposes. It was around 1948 that Eritrean riders began to appear in the competition stages. A team “Africa” comprising of indigenous riders was set up.

Since then cycling races have been one of the favorite sports activities in the country. And within the course of time many renowned Eritrean cyclists began to emerge.

Unfortunately Eritrea was not allowed, in fact denied, to stand on its own as an independent entity and condemned to remain under the yokes of colonialism. And with all the challenges and under the grip of brutal colonialists the cycling sport remained one of the dominant sports in Eritrea. It was at those times that the renowned cyclist like Fesehatsion Gebreyesus, Yemane Negasi, Gebretensae Mehari and Beyene Simon began to emerge to the extent of representing the then Ethiopian colonialism in the All Africa games.

In the 1972 Melbourne Olympics it was Eritrean riders Tsehaye Bahta, Mesfun Tesfay, Fesehatsion Gebreyesys and Yemane Negasi who represented Ethiopia.  That time and ever since Eritrean cyclists dominated the sport. Hence, it is not by accident the cycling has become the favorite sports activity in Eritrea, it was through process.

Immediately after independence, cycling, like any other sports activities, took the attention of the Government and the people and huge investment was made for their development. Cyclist like Yemane Tekeste represented Eritrea in regional and international games waving the Eritrean flag.

The last six-five years, however, are unique in the cycling history of the country. In these years Eritrean cyclists began to dominate the sport in regional and continental levels and began to draw the attention of many in the international level.

In Africa many who have the knowledge of the sport were driven to acclaim that countries like South Africa, Morocco, Egypt, what have you, were the dominant figures in cycling. But to day that perception has become a

forgone history. Eritrean cyclists are the best and the books of cycling in Africa only confirm that. The UCI Director, Mr. Jean-Pierre van Zyl, commenting about Eritrean cyclists said “They have conquered Africa and now they have to conquer the world and have the potential to do that”. Right comment and right observation. Eritrean cyclist have conquered the African Championship  in Rwanda in 2010, in Asmara in 2011, and now in Ouagadougou, Burkina Faso a week before.

Daniel Teklehaimanot and Natnael Berhane are now the indomitable African Champions in individual chronometer and in the road race. And Eritrean cyclists have become African champions for the third consecutive times dominating the race.

Once again Mr. Jean-Pierre regarding the Ouagadougou 2012 Continental Championship said “”In several events the speed average was impressive and in the men’s road race we saw a compact peloton of thirty riders together once the selection was made. It means there were not only two or three nations fighting together but a wide range of countries which have reached a very interesting level.”  And that was in such a fight for glory the Eritrean riders emerged as the best African riders to snatch almost all of the medals that were presented for the game. Isn’t that interesting and very happy event for Eritreans? And that is every ones hope to see its sustainability in the coming more games.