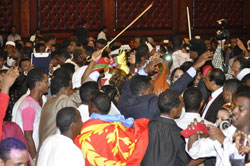 The fourth community festival of Eritreans residing in Qatar which commenced with patriotic spirit on 15 November concluded on 17 November with variety of activities and seminar.

Asmara, 18 November 2012- The fourth community festival of Eritreans residing in Qatar which commenced with patriotic spirit on 15 November concluded on 17 November with variety of activities and seminar.

In a seminar they conducted regarding the objective situation in the Homeland, the participants commended the efforts being conducted by the Government to enable citizens become beneficiaries of national resources and improve the socio-economic life of the people and that they would live up to expectations for the success of national development programs and reinforce resistance.

They further indicated that the big development programs in the country are vivid evidence for the strong spirit of resistance and capacity of implementation of the Eritrean people and that they would reinforce participation for the success of the programs.

Mr. Abdalla Jabir, Head of Organizational Affairs in the PFDJ, lauding the strong participation of Eritreans living in different parts of the world at the time in which the Government and people of Eritrea are exerting efforts to ensure national economic development standing firm against different external hostilities, called on citizens living inside the country and abroad to strengthen resistance and participation in national development programs.

He further said that the strong resistance of the Eritrean people that brought about independence, ensured sovereignty and is working developmental miracles is the main target of those external conspirators. He underlined that the external hostilities have strengthened the unity and will power of Eritreans contrary to the objective of the dreamers and that currently the Government and people of Eritrea are in a stable social, economic and political stage.

Eritreans residing in Qatar told reporters from the Ministry of Information that the yearly festivals they have been conducting provides a favorable environment for preserving cultural values, nurturing their children with national values and foster their participation in the national development programs.