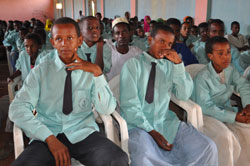 Youths in the Northern Red Sea region’s urban centers of Nacfa and Afabet voiced readiness to back up the national development program.

Nacfa, 19 November 2012 – Youths in the Northern Red Sea region’s urban centers of Nacfa and Afabet voiced readiness to back up the national development program. They made the pledge at a meeting with Mr. Ahmed Jaefer, head of the NUEYS branch in the Northern Red Sea region, during which it was stated that remarkable accomplishment has been registered as regards raising the political awareness of youths in the region.

Pointing out that development and dignity of a nation is highly determined by the commitment of the youth, Mr. Idris Ali Shiker, Administrator of Nacfa sub-zone, indicated that the role of youth citizens has become significant to this end. He further expressed appreciation for the accomplishments being registered by them in the domains of sports and culture, and asserted that the Administration would collaborate with youths.

The participants of the meeting called on the NUEYS branch office to step up endeavors towards promoting the culture of readership.