Buya: the origin of the first Homo sapiens 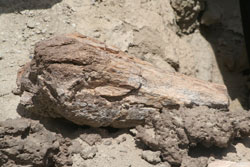 The historic archeological site of Buya is believed to be the home and origin of one of the first Homo sapiens. In 2003 experts from the National Museum of Eritrea, the University of Florence and the Pigorini Museum (Italy) discovered the remains of a lady, believed to be 18 to 22 of age, which traces to one and half million years ago. Buya at one time in history has been covered with water from the Red Sea and through time due to climatic changes took the state of its current status, dry land. The ten years research carried out on the Buya area is one of the crucial and great achievements made in studying the human origin. Researches on the area revealed incredible findings of paleontological and archeological significance. Based on the research done a new – 1million years old ‘erectus-like’ hominid evidence was discovered and this is a great step towards the discovery of the ancestry of modern man. (Archaeo-Historical Research on Eritrea, National Museum of Eritrea, 2008) Buya is located along the Great Rift Valley that stretches from East Africa all the way to North Africa.

The Danakil Depression, which is located inside the Great Rift Valley, is the main source of the concentrated discovery of human origins. According to the geological assessments made so far, the area is part of the East African Great Rift Valley, in which most of the evidences for human origins have been discovered. The thick sedimentary successions contain a good record of short-term environmental variations induced by several factors, such as local and global-scale climatic fluctuations particularly recurrent during the late Cenozoic, tectonic instability, and volcanic activity commonly connected with rift development.

The geological and paleontological field research that was carried out since 1994 in this part of Dankalia resulted the discovery of numerous Pleistocene vertebrates and archeological sites including the remains of lady Buya. The

sites are also thought to form the most concentrated and extensive prehistoric locality for the one million years old chronology any where in the world.

Buya, as evidences on the ground indicate it was also a place where big animals like Elephants, ancestors of the modern bull, and crocodiles existed. The remnants of these big animals are still visible, as a form of fossil. The fossils are exposed on the ground due to recurrent erosion, volcanic eruption and climatic changes. The existence of the animals in the area also indicates that the inhabitants of Buya which were known as Dubia were using those animals for food, meat, and for farming.

The remains of the big animals, especially bones, through time were turned into hard stones and scientifically are called fossils. On the ground, unless you have some experts to explain it would be very hard for an amateur visitor to identify the fossil from the other stones found there. Even one might take the big foot of the elephant as a marble stone.

The Dubia people in Buya, whether to slaughter an animal or for any kind of household activities were using specially crafted stones as knives and other means of production. The varied climatic changes that occurred in time and space in Buya did not deter people from continuing to live there. In fact, the wide spread of the artifacts there could possibly be an evidence that the people at that time had a better living condition and the area to be very suitable for humans to live and survive.

What is interesting of Buya is not only the history it holds. The people living there are very much aware of the importance of the existence of such a historical place around them. They are fully aware that one day these places would be an attraction for tourists, especially researchers, and be their source of income and their better future.