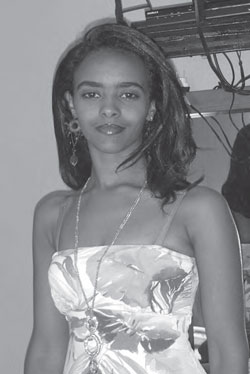 Let’s start with your child hood. Tell us about it.
My name is Almaz Yemane and I was born in 1987 in Sudan. In 1993 I and my family moved to Asmara, and I grew up here ever since. I started working in arts actively than ever after I finished my studies.

Could you tell us how you started working in painting?

I can’t tell. I mean, I simply don’t remember a point in which I discovered the beauty of art or a point in which I decided to take it seriously. It was just in me ever since forever, it was so normal that it still feels as a very ordinary thing of my daily life. Nevertheless I sometimes think to myself that I maybe have used it to run away from my studies because I wasn’t that good of a student.  It’s funny!!! It’s not a bad thing though… I guess. Luckily my sister and her husband supported me a lot; they didn’t shoot me down because I wasn’t scoring high with my mark.

Recently you and some other artists hosted an art exhibition. How was it?

Yes we did, and it was really good. It was organized by me and 11 of my fellow painters and we had a good response from the public.

How many times have you participated in art exhibitions?

How about some kind of contests?

Yeah. Last year in fact I won the first prize in an art competition organized by the NUEYS (National Union of Eritrean Youth and Students). I presented three of my works: one was a paint in which I drew  a little girl holding the world map, anther one that illustrates a young “Hidareb” playing the “kirar”, and last but not least a very emotional painting in which you could see a mother that fetches people from fire… I wanted to give an abstract

contribution to the role of a mother.

It sounds like you have some really interesting works. How come you haven’t had an exhibition of your own yet?

I don’t think it really matters. Maybe it’s because I am used to work with one or more artists, I find it more exiting. In fact am planning to host another exhibition in March with a colleague.

Did you go to any sorts of art schools?

Yeah I did. In 2003 I took some basic classes in the NUEYS for two years and after that I joined the Segen Eritrean Artist Group where I learned a lot of things both theoretically and practically. Following to that in 2010 I studied “engraving & etching” in the “Alliance Françoise” and I even studied the art of ceramics but I actually never worked on it.

May I ask the meaning of an exhibition to you as an artist?

What would you say about painting?

Honestly, to me and according to many painting is an international way of communicating. You could write a whole book in a painting, especially in abstract paintings you get to have all the freedom in the world to convey any kind of messages, history, dreams, fear, emotions or facts. That’s what I love and enjoy about it. In paintings no words are needed, because it is a real manifestation of the inner self. It’s a silent power!!!

Let me ask you something personal… have you ever used you self as an example in you artistic works?

Not really, few times but nothing serious. But as I was saying before it’s only natural that there is some of the “inner me” in my works, it all goes back to what I said before: art is indeed a reflection of the artist. A lot of time my mother and my sister inspire me, they were the two people who encouraged me and gave meaning to my life trough out my whole existence.

Ok! Where do you see yourself in five years?

I picture my self being a wife and a mother, and own a studio of my own and keep on rocking with my job and passion.
We really wish all the best. And thank you so very much for being here.