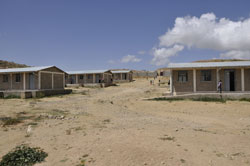 In the central Region, there are 12 new schools which start to give services in 2012. These schools cover from primary up to secondary levels. Beside the newly opened schools, there are other schools which have been renovated and further equipped with new educational materials and laboratories such as Adi-ke and Toker secondary schools. As there has been a growing population in the central region, the Government has been exerting efforts to meet the ever-growing demands. The basic objective of opening new schools every-where in the country is evidently to equally give a broader access to education for all nationals. Every child should get educational access at ease at the appropriate schooling age. So, the growth in the number of schools is just to correspond with the ever-growing population of the central region. The construction of such new schools have in fact created a conducive ground for students who pursue their education at primary and junior levels and the deficits in secondary schools would soon be solved.

Even though the Government provides nationals with better opportunities of getting access to varied facilities through setting up social service giving institutions, the ownership of such services is of the people. Thus, the new schools that are now constructed with the assistance of Ministry Education’s Project Management Unit (PMU) and regional administration have started to give services to a number of beneficiaries. As part of developing a sense of ownership on the part of the inhabitants of the areas in which the new schools are constructed, the construction of fences will be finalized through the contribution of the people.

Representatives of parents of the students who work as committees in each respective school have also been playing a significant role in ensuring that the schools are kept in good working conditions. Thus, sustainable renovation activities are expected to be conducted through popular involvement.

What one could easily observe in the education sector is that there is a rapid growth in the number of students and particularly that of secondary level. However, there are no worries at primary and junior levels for there is enough number of schools that could embrace a number of students in all respective localities of the central region.

In distribution wise huge achievement has been registered in the education sector. Bur, it is undeniable fact that electric supply, ICT and laboratory equipment still needs to be fulfilled if the new schools are going to offer better services.

The new schools constructed in 2012 are situated in three sub-zones of the central region such as in Berik, Gala-Nefhi and Seregeka sub-zones. In Gala-Nefhi sub-zone, Embeyto junior and secondary school, in Adi-Hamushte a primary school and teachers’ residential houses, in Adi-Guadad a primary school have started to give services. Schools in Himbrti have also been upgraded to render broader access.

In Berik sub-zone, for instance in Adi-Beney, a new primary school and teachers’ residential houses have been finalized. In Seregeka sub-zone, new schools in Guritat and Gheshnashim and a secondary school in Dek-Seb as well as another school in Emba-derho started to give services at junior and secondary levels. In-Gheremi, a primary school that has been constructed recently is expected to offer service soon. A new extension in Adi-Nifas around Asmara, a resource center opened in Edaga-Hamus, and another school constructed in Arbate-Asmara, in Sembel, in Para-Duba and also in Adi-Abieto are playing due role towards the growth of education sector.

As the new schools are already equipped with the necessary educational facilities, there would be no deficit of any sort in all schools.

Buya: the origin of the first Homo sapiens