Mining and Exploration Activities in Eritrea 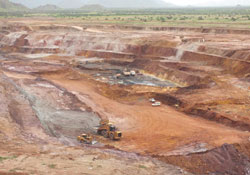 There are now twenty exploration and mining companies operating in Eritrea and represent Canada, Australia, China, UK, UAE and Barbados. One of them is an operating mine while another one has finished most regulatory requirements to start development work. Two more companies are following suit by completing feasibility studies soon. Total surface area covered is a little over 17.5 thousand sq.km. from which the mining license area is 41 sq.km.

Bisha Mining Share Co (BMSC) is a mining company formed by a joint venture agreement between Eritrea’s National Mining Corp. (ENAMCO) and Canada’s Nevsun Resources Ltd. BMSC managed to successfully start and operate the first modern mine in Eritrea. Bisha mine was commissioned in the end of 2010 and commercial production started in February 2011. Since then mining continues with strong operational and safety performance. Bisha is a high grade, low cost mine with 28 million tons @ 1.78 g/t gold, 38.9 g/t silver, 1.6% copper and 3.15 % zinc and indicated and inferred resource of 10.6 million tons @ 0.67 g/t Au, 47.78 g/t Ag, 0.91 percent Cu and 5.67 percent Zn consisting three layers of mineralization, the oxide, supergene and primary zones.

After operating the mine for over a year and half BMSC has recently announced a new reserve totaling 26.5 million tonnes for a total of 167,000 troy ounces of gold, 1.041 billion pounds of copper, and 2,680 million pounds of zinc. As indicated above the gold reserve in the oxide cap will last only for few months. The addition of the Harena gold, for which a mining permit has recently been issued by the MoEM, will extend the life of the current gold recovery operation until the expected commissioning of the copper plant in mid 2013. Copper production is expected to be 180 million pounds of payable metal per year, in concentrate with significant gold and silver

byproduct credits. The concentrate will be shipped using the existing Massawa container port.

In addition to the Harena mine, resource expansion opportunities include the Bisha main inferred resource, the near surface hanging wall copper and the Northwest deposit. Exploratory drilling has been carried out to better determine the extent of these resources.

Zara Mining Share Company (ZMSC) is joint-venture between ENAMCO and Chalice Gold Mines an Australian exploration company. ZMSC owns the high grade, Koka gold deposit and a substantial, largely unexplored, land package to the north and south of this deposit. The Koka deposit is estimated to host around five-million tons of ore, grading at 5.3 g/t gold, for 840 000 contained ounces.

The deposit further hosts a probable ore reserve of 4.6- million tons, at 5.1 g/t gold for the 760 000 contained ounces. The Company is focused on developing the Koka Gold Deposit into a low cost open-pit gold mine which is expected to produce 104,000 ounces of gold per year over a 7 year mine life at an average cash cost of US$ 338/oz gold.

A mining agreement has been signed with the MoEM in January. The SEIA and SEMP documents have been thoroughly reviewed by various stakeholders. The Department of Environment, Ministry of Land, Water and Environment has recommended conditional clearance to ZMSC in June and the MoEM is considering approving to start development works, which is expected to start in October.

In addition to this, Chalice, through its wholly owned subsidiary Sub-Sahara Resources (Eritrea) Ltd., holds exploration licenses at Hurum (275sq.km.), immediately southeast of ZMSC’s Zara licenses and at Mogoraib (550 sq.km.), north of Bisha VMS mine. ENAMCO has acquired 40% interest of these licenses. In Mogoraib, based on the Versatile Time-domain Electro-Magnetic (VTEM) survey and regional and detailed geological mapping and ground gravity geophysical surveys a 5000m diamond drilling program of the basement conductors has started. In Hurum, stream sediment sampling has identified an area of highly anomalous gold values in the north of the property.

Sub-Sahara was active in Eritrea in the past twelve years and remembered as a company who has promoted the Debarwa to the advanced exploration and discovered and defined the resource of Koka before Sunridge and Chalice took over the properties respectively.

Sunridge Gold Corp.(SGC/TSX) is a Canadian, mineral exploration and development company engaged in exploration and development of base and precious metal deposits partially surrounding Asmara. Hence collectively the project is known as the Asmara project and includes the Medrizien,Adi Nefas and Debarwa concessions. Sunridge has acquired the property from Sub-Sahara Resources in 2003. This area has previously been explored by different companies including Phelps Dodge, Western Australia, La Source Development, Golden Star and Ashanti Gold.

The main focus of the company in the past twelve months was to advance these projects to mining. As a result it has produced a pre-feasibility study in May 2012 which considered an integrated mining operation for all four deposits with a central mill located at Emba Derho. Independently a feasibility study was completed for the Debarwa deposit as a standalone mine. The fate of Debarwa will be decided early next year when the Feasibility study for the integrated mining is completed. In line with this environmental studies are going on.

STB Eritrea Pty. Ltd.(STB) is a subsidiary of South Boulder Mines Ltd., a junior Australian exploration company and is successfully promoting the potash resources of Colluli in Danakil area. Fortunately for the company, in a short period of time, it has delineated two independent ore bodies that contain significant amount of potash at shallow depth. A JORC/43-101 compliant resource has been established totaling 1.08Bt @ 18% KCl with total contained potash of 194Mt. An Engineering Scoping Study (ESS) completed in November 2011 considered the production of 1Mt p.a. of potash by open pit mining.

The ESS produced a highly attractive economic result that warranted further study. Relative to the entire potash industry, Colluli Project has the cheapest initial costs and the lowest operating costs. The ESS has considered extraction of the upper Sylvinite layer which is only less than 16% of the potash. Definitive Feasibility Study (DFS), which is expected to be completed in 2013, will consider mining and processing the Carnallite and Kainite layers. Along with the preparation of the DFS, STB together with MoEM are producing the Terms of Reference for the compilation of Social and Environmental Impact Assessment.