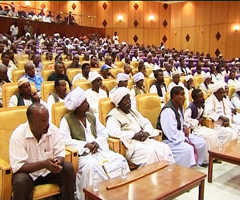 Eritrean community members residing in Port Sudan city voiced readiness to back up the nation’s economic development, and lauded the groundwork laid in this regard.

Asmara, 28 November 2012 – Eritrean community members residing in Port Sudan city voiced readiness to back up the nation’s economic development, and lauded the groundwork laid in this regard. They made the statement at a meeting during which Mr. Ibrahim Idris, First Secretary at the Eritrean Embassy, gave extensive briefings regarding the objective situation in the Homeland and commended the active participation of the community members in state affairs.

Mr. Ibrahim said that the Eritrean people and its leadership could demonstrate success in development endeavors and put up staunch resistance against external conspiracies thanks to their spirit of steadfastness. He further underlined that the participation of the community members in the Second National Investment Conference due to be held next month is crucial, and called on them to become prime beneficiaries of national resources.

The fact that the government has organized investment conferences twice within a year attests to its readiness to promote the sector, and a number of citizens have shown interest towards exploiting the nation’s investment prospects, Mr. Ibrahim elucidated.

The participants of the meeting expressed conviction that the upcoming Investment Conference would be valuable in compiling information for business plan.

Anseba region: NUEW to step up endeavors towards improving livelihood of needy members