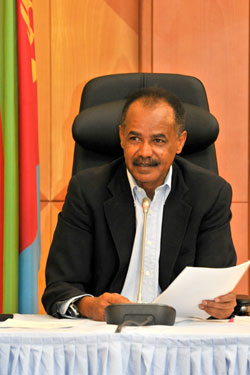 The meeting of the Eritrean Cabinet of Ministers got underway today at the State House.
In opening remarks, President Isaias Afwerki pointed out that the Eritrean economy is making headway despite the consequences of war and a situation of neither peace nor war, in addition to withstanding external conspiracies and pressure.

Asmara, 29 November 2012 – The meeting of the Eritrean Cabinet of Ministers got underway today at the State House.

In opening remarks, President Isaias Afwerki pointed out that the Eritrean economy is making headway despite the consequences of war and a situation of neither peace nor war, in addition to withstanding external conspiracies and pressure.

The main agenda of the meeting focuses on assessment of the action programs for the year ending and the charting of those for 2013. In this connection, the Ministerial Cabinet conducted discussion on the working paper the President presented pertaining to integrated development for the coming year.

The working paper outlines that the national policies, strategies, programs, projects and plans aim at promoting economic growth, and that all sectorial and regional action programs should be assessed vis-à-vis their contribution to the Gross National Income (GNI) and the impact on the improvement of the living standard.

President Isaias went on to elaborate that economic growth could not be measured on equal variables in both developed and underdeveloped economies, as well as under normal and abnormal

circumstances. In this regard, he stressed that the so-called statistical statements concocted with a view to serving public relations gimmick should be set aside, and that genuine and sustainable development in a given country should be gauged in terms of the improvement in the living standard of nationals.

The President further explained that the main indicators of economic growth depend on the output of goods and services vis-à-vis the purchasing power to this end, as well as Gross National Product (GNP), improvement in people’s standard of living and enhancement of social services, among others. In this connection, he underlined the need for reports compiled to highlight factual figures supplemented with an objective assessment. Moreover, President Isaias indicated that the programs outlined for 2013 would differ from the previous ones both in terms of approach and content.

He also elucidated that the main indicators of real growth include that of capital accumulation, enhancement of human resource potentials, availability of natural resources, upgrading of production capacity and management, technological competence, besides market demand at national, regional and international level. Furthermore, the President highlighted the yardsticks to be applied in the assessment of action programs.

In this connection, he stated that all the reports regarding work accomplishments on the part of all government agencies need to be presented from the standpoint of the aforementioned criteria. By the same token, the prospective outcome of future action programs needs to apply the same criteria, he elaborated.

Following the President’s briefings, the Ministerial Cabinet conducted extensive discussion in the afternoon hours as regards the organization and work coordination among government agencies and the implementation of development programs, besides domestic and regional developments and the like.

The Ministerial Cabinet meeting is scheduled to continue tomorrow.