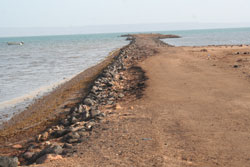 Marsa Fatima came to become a place of history with the coming of the Italian colonizers to Eritrea. The Italian colonialism, as history tells us is known as settler colonialism. Settler colonialism is when colonizers come to one country not only in search of raw materials and cheap labor but also to permanently settle there and make the country as their own. That is why Italy in its first years in Eritrea brought in hundreds of thousands of Italians, mostly poor peoples and peasants from Sicily, to Eritrea. Those poor Italians were brought in to make fortune and alleviate themselves from poverty and consider Eritrea as their future country. Marsa Fatima was therefore an important small port for the Italians where they took it as nearby gate way for exploitation of potash from the Dalul Depression. It was also one of the different strategic places where the Italian colonizers used to prepare themselves militarily to invade and ultimately conquer Ethiopia. In Marsa Fatima the Italians had big stores where they used to accumulate war supplies for their invading army to the south.

Marsa Fatima has also been very important place during the long years of armed struggle for Eritrean independence. The marsa, a small port, was highly used by the Eritrean People’s Liberation Front for transporting of different items of supplies needed for the struggle.

Even though there is no trace on the ground it is said that the Italians had a plan to build a railway line from Marsa Fatima to Ethiopia, especially to Dalul where they believe there was large reserve of Potash.

There are also cemeteries of Tigryan warlords and Eritreans who died during the Second World War fighting alongside the Italian colonizers.

The name of the place, Marsa Fatima, is derived from a lady, Fatima, who used to live in the area. Marsa Fatima is ninety five kilometers from Dalul where the potash reserve is found. Buri Peninsula is located at the Ingel administrative area. The peninsula is eye catching and very beautiful and inviting to stay there and enjoy the scenery. If properly exploited it is one of the wanders in the country that could be potential for tourism industry.

The Island of Delme is also one of the attractive areas in the region. This island had been a strategic strong hold of the Italian colonizers from which they control ships coming and going through the Red Sea. It is also an island where one finds the remains of the successive colonizers that have been coming and going, the Turks, Egyptians and the Italians. The island of Delme is located at the South Marsa Channel of the Red Sea and is in the vicinity of the Dahlak Island.

The Delme Island because of its strategic location in the Red Sea has been, especially during the Second World War, one of the main strategic locations where the Italians used for controlling enemy movements. The remains

of heavy artilleries that are still on the ground are testimonies for the island to be once a very strategic place. There are also unexploded explosive devices scattered here and there on the island.

On the map Eritrea may look very small. However, on the ground it is very rich with its plenty of historical and archeological resources for on every inch of its land history was made, history stretching back to the ancient times, from the time of Queen Astshebsut of Egypt to the time of the armed struggle for Eritrean independence. And most of the history is found along the Red Sea.