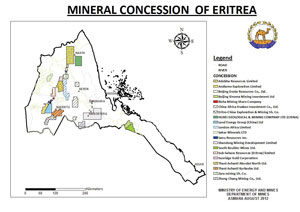 NGEx Resources/Sanu Resources Inc. is a Canadian exploration company, remaining with only the Mograib exploration license. The request for extraordinary extension of the Kerkebet license has been rejected by MoEM and Lelit and Shikula properties were relinquished by the company itself. Sanu has flown a VTEM survey over the entire exploration package. The most advanced work was done in the Mograib area where the Hambok deposit was defined. Hambok deposit has an NI43-101-compliant indicated resource (@0.75% zinc cutoff) of 10.7 million tones grading 0.98% copper, 2.25% zinc, 6.84 g/t silver, 0.20g/t gold and an additional inferred resource (@0.75% zinc cutoff) of 17.0 million tones of 0.85% copper, 1.74% zinc, 5.89g/t silver, 0.19 g/t gold. Initial drilling works in the Aradaib Prospect, in the Kerkebet license reported interesting results such as 13m of 3.3 % copper, 5.6% zinc, 1.8 g/t gold, 46 g/t silver. Recently NGEx Resources, subject to the Ministry’s approval, has decided to sell the Mogoraib project to BMSC for US$5,000,000 and additional cash consideration of US$7,500,000 upon the commencement of commercial production from the Mogoraib Exploration License.

Andiamo Exploration Ltd. is a junior UK based exploration company that has been actively engaged in regional, as well as detailed geologic mapping, image interpretation, soil sampling and ground gravity surveys in the Haykota area since 2009. In addition a VTEM survey was carried out over the whole 716 km2 exploration license area. Andiamo bought state-of-the-art ground magnetic and IP/Resistivity equipment and has developed an in-house capacity to carry out detailed surveys. Based on the above works it has identified a total of 24 potential VMS target areas including 15 targets for gold exploration. Follow up of several of these target areas including exploratory drilling at five prospects have being carried out. The MoEM has recently approved the first ordinary extension of the license which will allow Andiamo to continue its exploration until July 2013. A preliminary resource assessment is expected for some of the prospects within the extension period.

Beijing Donia Resources Co. is a Chinese exploration company that initially acquired exploration licenses for iron in various parts of Eritrea. The results were not encouraging in terms of tonnage and the metal price and

therefore decided to relinquish all iron exploration activity. Since 2007 the company is exploring for gold and base metal resources in Kenatib southern Eritrea. In the past five years of exploration right over this area Bejing Donia has conducted geologic mapping, gravity and IP surveys. Based on results it is planning to carry out test drilling on some of the prospects.

Land Energy Group (China) Ltd. Is a Chinese exploration company that is looking for gold and base metal deposits in Gogne area. The area extends from Gogne north to Tekawda, south of Bisha mine. There is high probability to find a Bisha type VMS deposits or prospects like those found in Haykota area. Most of the work so far carried out is limited to sampling and assaying including trench sampling in localized area. However, small but unsuccessful drilling has been carried out in the past.

China Africa Huakan Investment Co. has exploration licenses in Seroa, north of Keren, and Mensura area granted in 2009 and 2011 respectively. A couple of holes have been drilled at Seroa with some encouraging results. Further work will be approved by management based on the results. Mensura was originally a prospecting license which was transferred into exploration after conducting regional works over the whole area. Regional and detail mapping and sampling programs are continuing.

magnetic survey over selected targets has been carried out.

London Africa Ltd. is a British private exploration company that has an exploration right over 1,168 km2 area near Akordat which also includes the Orota area. Regional works and VTEM survey over 60% of the area has identified numerous prospects within four mineralized districts defined by the company. A shallow diamond drilling (10 holes, 777m) has been carried out early this year to test main section of the quartz veins in the Taninay gold prospect. Encouraged by the results London Africa is planning to cover the prospect by RC drilling. Further detail follow up programs including sampling, gravity survey and drilling is planned for the other prospects.

“Back when I was a kid I found books very exciting”