One thing all women have in common: “Fashion” 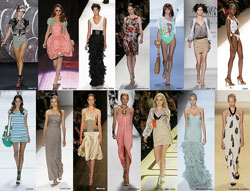 Fashion is a general term for a popular style or practice, especially in clothing, footwear, accessories, makeup or body piercing. “Fashion” refers to a distinctive trend in a look and dress up of a person, as well as to prevailing styles in behavior. “Fashion” usually is the newest creations made by designers and are bought by only a few numbers of people; however, often those “fashions” are translated into more established trends. The more technical term, “costume,” has become so linked in the public eye with the term “fashion” that the more general term “costume” has in popular use mostly been relegated to special senses like fancy dress or masquerade wear, while the term “fashion” means clothing generally, and the study of it.

The media plays a very significant role when it comes to fashion. For instance, an important part of fashion is fashion journalism. Editorial critique, guidelines and commentary can be found in magazines, newspapers, on television, fashion websites, social networks and in fashion blogs. In the recent years, fashion blogging and YouTube videos has become a major outlet for spreading trends and fashion tips. Through these media outlets, readers and viewers all over the world can learn about fashion, making it very accessible.

At the beginning of the 20th century, fashion magazines began to include photographs of various fashion designs and became even more influential on people than in the past. In cities throughout the world these magazines were greatly sought-after and had a profound effect on public clothing taste. Talented illustrators drew exquisite fashion plates for the publications which covered the most recent developments in fashion and beauty.

As people, mostly women, follow these magazines or advertisement of these various fashion with enthusiasm and much interest; they get drowned to think and to believe that fashion is essential for our daily lives.

Unfortunately there isn’t an age for girls in which you are too young to care about fashion or too old to drop your interest in fashion. Young girls spend most of their time trying to look cool and constantly trying to keep up with fashion. Without doubt now more than ever women are mostly shopaholic and this has consequences in every aspect of life: They finish all of their money, they can’t save enough to do something for their future and worst of all they get the illusion of a good life. Just because you might dress like a Hollywood actor doesn’t make you any similar to that person. As your experiences, your background, your culture are not the same nor similar. Who you are can be defined by many things but the fact that you have one of the latest brands of Gucci’s handbags says pretty much nothing about you.

Women feel like they must look their best for their own self-esteem. Newspapers and magazines are stuffed full of shiny, polished women who wear cutting edge clothes and flawless makeup. No woman ever looks at these women and thinks, “well she looks nice and good for her!” No. They think “I want to have those clothes so that I will look as good as she does.” As stupendous and superficial as that sounds, fashion is spurred by the craving women feel to look good. Magazines suggest that the clothes wear the model when often it is the other way round.

There is no denying that there is self-gratification in fashion for women. To wear new clothes and make-up boosts confidence and creates extra enthusiasm in everyday life. The biggest and most important lift, however, comes from the changes you make in your life not in your appearance.

In conclusion, women live in a world where fashion is the ultimate thing. Women fight each other with fashion to compete for attention. If this was not true, women would look at fashion with a casual eye, dismiss the hassle and let it all hang out in their sweat pants.

The economics of investment for prosperity and dignity