Mining and Exploration Activities in Eritrea (Part III and Final) 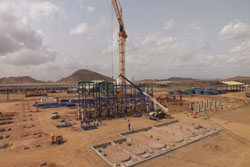 Sahar Minerals Ltd. is a privately owned exploration company established and registered in Bermuda in early 2009. In February 2010 it was able to acquire two exploration licenses (Augaro and Harab Suit) in Eritrea. Sahar took over operation of the Augaro property from Eritrea-China Exploration and Mining Share Company (ECEM) following the JV agreement signed between the two companies. ECEM by itself is a JV company formed by ENAMCO and a Chinese company and was managing exploration works in Augaro since 2007. On the other hand, Harab Suit is a 379 km2 exploration license, located in the NW part of Eritrea close to the Sudan border. Both properties are historically known for gold mining by the Italians and were also subject to recent exploration by various other companies. After reassessing previous works Sahar conducted regional and prospect scale investigation comprising of mapping, sampling and geophysics. So far Sahar has drilled 15,991m RC and 497 DD in Augaro, and 2,060m RC in Harab Suit.

Adobha Resources (Eritrea) Pty Ltd., a wholly owned subsidiary of Gippsland Ltd, is an Australian junior exploration company. It has two contiguous exploration licenses in the

Adobha area in northern Eritrea with 2,200km2 combined surface areas. Both licenses were converted from prospecting after a thorough preliminary helicopter assisted reconnaissance surveys were completed. Airborne geophysics over the entire area was carried out using VTEM system. The results from these surveys and subsequent follow up works led the company to initiate a RC drilling program over a selected prospect. The program required Adobha Resources to clear long access road from Zara to mobilize the drill rig to the site.

Thani-Ashanti Akordat North Ltd. and Thani-Ashanti Kerkasha Ltd. Are two independently registered exploration companies representing the Thani Ashanti of UAE, a recently-formed Strategic Alliance between AngloGold Ashanti and Thani Investments. The area of operation is in the Gash Barka region with partly extension of Akordat North license to the Anseba Region. Making a total of 1863 km2. A 10,000 line km VTEM survey has been completed over both areas in early 2011 and since then the company was actively engaged in follow up sampling. The Akordat North has been covered by extensive stream sediment sampling including the most recently completed helicopter-assisted sampling in the inaccessible NE part of the license. The company was happy the way the Eritrean General Aviation Services has managed to do the work efficiently and safely. Detailed mapping of target areas is planned with the ultimate aim of generating drill targets. In Kerkasha, work delayed because of an assumed security reasons. The Stream Sediment sampling started in April 2012 over two years after the granting of license. However, by late May almost two thirds of the area was sampled.

Beijing Sinoma Mining Investment Ltd is a Chinese exploration company looking for potash deposit in the 455 Km2 exploration in Dengel area immediately west of Colluli. It was granted the license in

late 2010 and since then was busy in establishing camp and importing in equipment for drilling. So far 10 holes have been drilled in the area with little intersection of potash mineralization. Gravimetric surveys were initiated to better define the lithological sequences. New arrivals to the industry include Chinese companies such as Shandong Mining Development Ltd., Min Metals Exploration & Mining Ltd., Hubei Geological Mapping and Mining Ltd. (China) and a UAE based Indian company, Bab al Rayan Jewellery PLC. These companies either they are inactive or only limited reconnaissance work has been done to be worth mentioned.

The Economics of Investment for Prosperity and Dignity (Part II)