The ancient port of Adulis 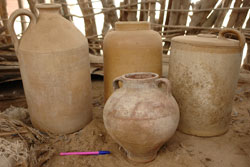 Adulis which is historically known, as one of the metropolitan city of the Axumite empire is an archeological site in the Northern Red Sea region, about 40 kilometers south of Massawa. According to Periplus of the Erythraean Sea, Adulis was the port of the Kingdom of Aksum, located on the coast of the Red Sea. Adulis Bay is named after the port. It is thought that the modern town of Zula may be the Adulis of Aksumite times, as Zula may reflect the native name for the Greek “Adulis.”

The origin of the name, Adulis, is not well known. However, Pliny, a historian who is believed to be among the first historians to write about Adulis, who misunderstood the place, and thought its name to mean founded by escaped Egyptian slaves. On the other hand, according to the inhabitants of the area, the Sahao ethnic group, Adolos means white water, a name given to the “white colored” water of the sea shore of the coast resulting from the splash of the wave or water current. (NME, 2008) Some historians also argue that Adulis existed long before the rise of the Axumite Kingdom. It was known during the Middle Kingdom of ancient Egypt as part of the land of Punt. This ancient and historical port city used to accommodate Greek and Phoenician ships as early as the 7th century B.C. According to Pliny describes it as an emporium for the ivory, hides, slaves and other exports of the interior. It may have previously been known as Berenice Panchrysus of the Ptolemies.

Another historian, Cosmas Indicopleustes records two inscriptions he found here in the 6th century: the first records how Ptolemy Euergetes (247-222 BC) used war elephants captured in the region to gain victories in his wars abroad; the second, known as the Monumentum Adulitanum, was inscribed in the 27th year of an unnamed king of Axum, boasting of his victories to the north and south of Axum.

A fourth century work traditionally (but probably incorrectly) ascribed to the writer Palladius of Galatia, relates the journey of an anonymous Egyptian lawyer (scholasticus) to India in order to investigate Brahmin philosophy, he was accompanied part of the way by one Moise or Moses, bishop of Adulis.

Munro-Hay, another historian of that era concerning the importance of the port of Adulis and its geographical location says “After Ptolemais of the Huntings, at a distance of about 3000 stades, there is the customary mart of Adouli, lying in a deep bay that runs southwards; in front of it an inland called Oreine (present day Dessie Island), which is about 200 stades out in the sea from inner part of the bay. … And opposite Oreine on the mainland, 20 stades from the sea, is Adouli, a village of moderate size, from which to Koloe (Qohaito), an inland city and the first ivory market, it is a journey of three days; and from this another five days to the metropolis called

Axumite, to which is brought all the ivory from beyond the Nile through the district called Kueneion, and hence to Adouli. For the whole quantity of elephant and rhinoceros which is killed grazes in the interior, though occasionally they are seen by the sea round about Adouli”. (NME, 2008)

Control of Adulis allowed Axum to be the major power on the Red Sea. This port was the principal staging area for Kaleb’s invasion of the Himyarite kingdom of Dhu Nuwas around 520. While the scholar Yuri Kobishchanov detailed a number of raids Aksumites made on the Arabian coast (the latest being in 702, when the port of Jeddah was occupied), and argued that Adulis was later captured by the Muslims, which brought to an end Axum’s naval ability and contributed to the Aksumite Kingdom’s isolation from the Byzantine Empire and other traditional allies, the last years of Adulis are a mystery. Muslim writers occasionally mention both Adulis and the nearby Dahlak Archipelago as places of exile, the evidence suggests that Axum maintained its access to the Red Sea, yet suffered a clear decline in fortunes from the seventh century onwards. In any case, the sea power of Axum waned and security for the Red Sea fell on other shoulders.

Adulis was one of the first Axumite sites to undergo excavation, when a French mission to Eritrea under Vignaud and Petit performed an initial survey in 1840, and prepared a map which marked the location of the structures they believed were temples. In 1868, workers attached to Napier’s campaign against Tewodros II visited Adulis and exposed several buildings, including the foundations of a Byzantine-like church.

The first scientific excavations were undertaken by a German expedition in 1906 under the supervision of R. Sundström, who worked in the northern sector of the site, exposing a large structure. Sundström labeled the “palace of Adulis”, as well as recovering Axumite coinage; their results were published in four volumes in 1913. R. Paribeni excavated in Adulis the following year, discovering many structures similar to what Sundström had found the previous year, but also a number of ordinary dwellings.

Wine amphoras imported from the area of modern Aqaba where found here. These types now called Ayla- Axum Amphora have since been found at other sites in Eritrea. Evidences of the ancient treasures of Adulis could be found at the National Museum of Eritrea and the Regional Museum of Massawa.

The artifacts that are exhibited in both museums include curved marble columns, depicted figures on marble slabs, amphora wares, and variety of ceramics. It is to be noted that the Adulite communities were distinctive from

the people who live in the hinterland, as they were in close contact with their foreign partners and it was possible for them to be influenced by other cultures from the outside world like the
Greeks, Phoenicians, Romans, Egyptians and other peoples from the hinterland. The Adulites were referred to as “the people of the coast”. (Archaeo-Historical Research on Eritrea, NME,2008).

From this historical perspective we can conclude that, Adulis is not only a national heritage of Eritrea but also has global significance. Its significance also lies on its contribution to the rise and fall of the major kingdoms of Axum and others.

Today this ancient metropolitan city of Adulis is buried underneath the earth anxiously waiting for archeologist to excavate and reveal its treasures to the outside world.

Wishing on the stars