Wishing on the stars 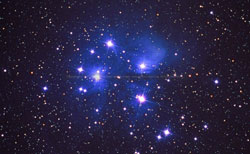 “Ideals are like stars,
you will not succeed in touching them with your hands,
but like the seafaring man on the desert of waters,
you choose them as your guide,
and following them, you reach your destiny.” After a busy day, a boring one or any other day if at night the sky is clear and full of visible stars wherever you might be you feel a sense of relief. Ironic as it is you feel secure and at home. They say it is one of the very few times, while you are fully conscious and awake, you can find an inner peace and you could go for consecutive minutes without one single tough occurring.

Although we all know, superficially or in detail, the real structure and origins of the stars, we still choose to let our mind wonder and be amazed by these beautiful jewels of the night.

Going into details a star is a massive, luminous sphere of plasma held together by gravity. The nearest star to Earth is the Sun, which is the source of most of the energy on the planet. Historically, the most prominent stars on

the celestial sphere were grouped together into constellations and asterisms, and the brightest stars gained proper names. A star begins as a collapsing cloud of material composed primarily of hydrogen, along with helium and trace amounts of heavier elements. Once the stellar core is sufficiently dense, hydrogen becomes steadily converted into helium through nuclear fusion, releasing energy in the process.

Sometimes though someone might choose to not think of the scientific explanation of the stars and believe in the legends that have been around us for thousands of years. This doesn’t mean you are close minded but simply that you want to allow a little bit of imagination and fantasy in your mind. The world is realistic enough for all of us that we don’t need to add to it.

I’m no doctor but I think it is the healthiest thing to believe in legends and beliefs because that makes life much easier. And if your mind is at ease then you can face any misfortune life throws at you.

So yes: the stars are not just put in the sky to give light they are living things, sent by some twist of fate to roam the heavens forever, never swerving from their paths.

Long ago, our elders use to say, the sky was so close to the earth that one could touch it. And maybe by now we know we can’t fiscally touch it but there are other ways. All you have to do is find something that makes you smile and forget about all of the things that disappoint you.

Believe that the “people from the sky”, as the old American tribes use to say, are watching over us and they will guide us towards our destiny.

As for the time being all you have to do is go to the closest place in which the sky is beautiful  and clear… relax  and make a wish on every shooting star you see because there wouldn’t be a sky full of stars if we were all meant to wish on the same one.

The ancient port of Adulis