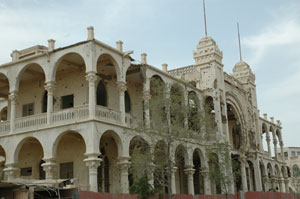 Masssawa is one of the ancient city ports on the Red Sea coast of Eritrea. It has been very important for many centuries; it has seen many colonizers including Egyptians, Ottoman Turks, Italians, British and Ethiopians until it was liberated by the Eritrean People’s Liberation Forces in 1990 by the famous Operation Fenkil.

For most of its history, Massawa was little more than a seaside village, lying in lands that pertained to the Kingdom of Axum in ancient times and overshadowed by the nearby port of Adulis. Following the fall of Axum in the 8th century, the area around Massawa became embattled by the Islamic forces emerging in the region (Arabs and later Beja peoples) and mutually rival post-Axumite Christian forces from the region of Midri-Bahri, a Kingdom in Eritrea.

Venetian Merchants were said to have lived in Massawa and nearby Suakin in the 15th century. Massawa became prominent when it was captured by the Ottoman Empire in 1557. The Ottomans made it the capital of Habesh. Under Özdemir Pasha, Ottoman troops then attempted to conquer the rest of Eritrea. Due to resistance, as well as sudden and unexpected demands for more troops in the Mediterranean and on the border with Persia, the Ottoman authorities placed the city and its immediate hinterlands under the control of one of the aristocrats of the Bellou people, whom they appointed Naib of Massawa and made answerable to the Ottoman governor at Suakin. The Ottomans nevertheless built the old town of Massawa on Massawa Island into a prominent port on the Red Sea in typical Islamic Ottoman architecture using dry corals for walls, roof and foundation as well as imported wood for beams, window shutters and balconies. These buildings and the old town of Massawa remain to this day, despite having withstood both earthquakes and wars with aerial bombardment.

During the 19th century, along with much of the African coast of the Red Sea, Massawa was ruled by Egypt with Ottoman consent. Following the Egyptian defeat at the Battle of Gura, Egyptian control of the port withered,

and with the help of the British, Massawa came under Italian control as part of their colony of Eritrea in 1885. In 1921 most of the City and Port of Massawa was destroyed by the Massawa Earthquake hampering the Italian colonial ambitions.

The Italian colonialists had nevertheless built Massawa to become the largest and safest port on the east coast of Africa, and the largest deep-water port on the Red Sea. Italy was allied to the Axis powers during World War II and Massawa was the homeport for the Red Sea Flotilla of the Italian Royal Navy (Regia Marina). When the city fell during the East African Campaign, a large number of Italian and German ships were sunk in an attempt to block Allied Forces use of the harbor of Massawa.

From 15th April 1942, later master diver and salvage specialist RNR Lieutenant Peter Keeble was assigned to the clearing of the harbour: He managed to salvage and refit an ex-Italian tugboat with simple means, before United States Navy Captain Edward Ellsberg and his crew arrived. Ellsberg took over, the wrecks were salvaged and the port was returned to service, as part of what had now become the British protectorate of Eritrea.

In 1945, following the end of World War II, the port of Massawa suffered damage as the occupying British either dismantled or destroyed much of the facilities. It said that the British administration took the facilities of the port elsewhere to its colonies in Asia.

From 1952 to 1990, when Eritrea entered into a federation with Ethiopia, the Haileselassie regime made Massawa as the headquarters for its Naval Force and stayed there until February 1990, when the Eritrean People’s Liberation Front captured Massawa in a surprise attack from both land and sea. The success of this attack cut the major supply line to the Second Ethiopian Army in Asmara, which then had to be supplied by air. In response,

the then leader of Ethiopia Mengistu Haile Mariam ordered Massawa bombed from the air, resulting in considerable human and material damage. To day Massawa, thanks to the relentless effort of the government of Eritrea is becoming one of the modern cities in the country with its beautiful building, roads and port facilities.

Massawa the very fact that it has seen many colonizers makes a tourism attraction city with its buildings and mosques of different types of architecture. History also tells us that Massawa is the first city in Africa which hosted the followers of Prophet Mohammed.