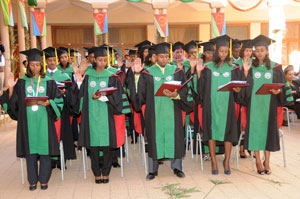 Isn’t pleasing to be accredited for accomplishing the set out goals with flying colors? More than stimulating pleasing feelings, it indeed fuels ones engine of can do sprit. With such motivating force, one not only repeats the knowledge and skill acquired during the process of learning but would in fact exert efforts to come up with more creative and life changing ideas. So, what has been accomplished in Eritrea’s health sector is of a tremendous progress in terms of acquiring the required know-how in varied areas of healthcare specialties.  However, it is not the number of commencements that impacts the transformation of Eritrea’s healthcare service, but the competence of the doctors and other medical specialists who has been graduating from Orotta school of Medicine and Dentistry as Well as Orotta Post Graduate Medical Education Program. Ms. Lisa Masterson, Co host of “The Doctors” –a popular TV show, once said that the doctors and other specialists who have been graduating each year are “more than competent”. Even if is in the early stage, the reaffirmation of  the acquired skills via external examiners and other medical experts who have been working in partnership with Eritrea’s Ministry of Health is indeed an indication of the ever- advancing  healthcare system of the country.

Like the previous accomplishments, Orotta School of Medicine and Dentistry has for the third time, since its establishment, graduated a total of 29 students of medicine as well as three pediatricians. The medical skill and knowledge these graduates so far acquired would definitely impact the future of the country’s healthcare service. As there is a growing keenness to join the post graduate medical education programs on the part of the new graduates of each year, the prospects of the overall medical service is very promising.

There will be definitely a better tomorrow for there would be a better healthcare service now and then. A number of areas have been completely changed through the healthcare service that has been offered everywhere in the country. Such an advance has also brought a behavioral change in the livelihood of every Eritrean family. With the expansion of advanced medical services, the notion towards adhering to traditional medication has almost

been totally eradicated. This behavioral change has not come easily, but through concerted efforts of educating nationals so as to cope up with up to date medical breakthroughs. Thus, the growing number of graduates has impacted for the opening of healthcare institutions even in the remotest part of Eritrea and this in turn influenced the livelihood of a number of Eritreans. Hence, no matter how simple or savior healthcare issue they have a number of beneficiaries have been flocking to the healthcare institutions within their localities.

All the graduates in the filed of Pediatrics are doctors who have been offering services for a number of years. Hence, they know people’s needs and aspirations in the provisions of healthcare service. If not for this, every graduate doctor would not look forward to pursue education in other medical specialties and subspecialty courses.

If ones accomplishments are assessed objectively by external observers and the result is very encouraging, ones endeavor to achieve more is redoubled. Encouraged by the feedbacks it received from different accreditation bodies, the Orotta School of Medicine and Dental Medicine has been working to expand the scope of the courses it has been offering. The PHD program in Biomedical Sciences which is about to be opened in the near future is an indication of the sustainability of the endeavors that aims at providing a better and more advanced healthcare service. Citing WHO’s report, Prof. Andemariam Ghebremichael, Dean of Orotta School of Medicine and School of Dental Medicine, said “What normally should have taken it thirty years to come this stage, Eritrea has done it in about six years.”

The Post Graduate Medical Education (PGME) Program which was opened following the development in the Schools of Medicine and Dentistry has been training specialists in Pediatrics, Surgery and Ob/Gyn. So far, it has graduated 8 pediatricians in December 2009 and as well as 4 in March 2011. Five Surgeons and five Ob/Gyn Specialists also graduated in November 2011 and February 2012 respectively.

Since its opening, the Orotta school of Medicine has in the last nine years registered commendable achievement in training 176 doctors and Orotta School of Dental Medicine would graduate 24 dentists in 2014 and 20 dentists would be graduated each year thereafter.

The ultimate objective of this medical education programs is to provide quality healthcare services to all patients in every part of Eritrea. The journey has started in a very encouraging pace and it would soon flourish to the point of amazement.  Such objective would be realized through the constrictive partnership schemes the country is maintaining with varied universities in Africa, Europe, Asia and the Americas and more importantly with the cease less efforts of nationals.

“I grew up surrounded by arts”