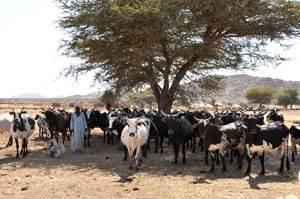 Most livestock producers in Eritrea are subsistence farmers. Their primary objective is to produce enough food to feed their family and to maintain sufficient reserves to see them through drought years. Cash income from sales of livestock is a secondary consideration and mainly directed to household necessities such as sugar, coffee, salt school fees and medicines. Production strategies are directed more at minimizing risk than at maximizing profit.

Pastoralism is a production system that relies for substantial amount of its output on livestock. Although it is difficult to tell how much is substantial, a definite prerequisite

for a system to qualify as pastoral is that it must involve some degree of mobility. Essentially, pastoralism denotes economies that derive the bulk of the food supply from livestock using a great variety of herding practice on natural pasture. Pastoralism usually consists of highly heterogeneous groups in their objectives, strategies, needs, management style and degree of mobility, hence, the basis for classification. In Eritrea we have nomadic pastoralism and transhumance with full mobility and agro pastoralism with partial or no mobility.

Nomadic pastoralism essentially revolves around the husbandry of livestock and the utilization of natural vegetation as fodder. Such an economy requires the availability of suitable domestic animals and of pastureland adequately large for sustaining the animals, because their livelihoods are totally dependent on the utilization of marginal resources. Nomadic pastoralists are forced to constantly migrate by the need to maintain their source of subsistence, namely livestock. In its purest manifestation, nomadic pastoralism is characterized by the absence of cultivation even as a supplementary income (Khazanov1983). Typical nomads are found in the Sahel where large tracks of relatively unoccupied land allow free roaming. In Eritrea the Afar, Rashida and the Hedareb are typical examples of nomadic pastoralists.

Transhumance involves regular seasonal migrations between, dry season and wet season pastures, upland and lowland pastures, upland and lowland cultivation, or pastures and salt. Probably a major difference between transhumance and nomadic pastoralism is that in transhumance the patterns of migration are more or less predetermined under normal circumstances. Nevertheless, predetermined migration does not in any way imply rigidity in traditional resource use by transhumant. These patterns are subject to substantial deviations in times of resource scarcity such as during drought. In general, the pattern of transhumance in East Africa is usually between highlands/plateau and lowlands/flood plains. In Eritrea the Saho, Tigre, and Tigrigna practice this between the Eastern coastal plains and the Eastern escarpments and the central highlands. The Tigrigna and Tigre are sometimes called opportunistic farmers, as often practiced in the Sahel. They plant crops, usually sorghum and maize on their way east to wet season pastures and harvest them on their way back west in the dry season. In between there are many different degrees of transhumance depending on the number and kind of livestock raised, type of crops planted and distance travelled. Each of these groups has distinct production systems and set of strategies that have evolved through generations.

Agro-pastoralism is another important type of pastoralism accounting, in many cases, for the bulk of total livestock populations. It is perhaps the most highly diverse form of pastoralism, with agriculture as the main subsistence activity, but where animal husbandry is an integral part of the household economy. The availability in agro-pastoral systems is essentially due to the recurrent drought and markets for crop and livestock, which are characterized by huge fluctuations in price and volume. Tigrigna, Kunama and Nara in the South Western lowlands mainly practice Agro-pastoralism.

The pastoralists of the Western Lowland Zone are predominantly transhumant as they retain campsite inhabited by women and children, while livestock migrate for forage and water elsewhere. There is a greater degree of

agro-pastoralism in the south west of Western Lowland zone than in the northwest, reflecting the lower rainfall and consequent less reliable crop production of the later. Lack of water supply is the primary reason for the migration of pastoralists from the northern part of Western Lowland zone with a shortage of feed also occurring in drought years.

Pastoralists of the Eastern Lowland zone have shorter distance to migrate than those in Western Lowland zone as the dry season camps for Eastern Lowland zone are on the eastern escarpment. In Central Highland zone farmers use the areas that cannot be farmed (because of lack of soil or extreme slope) as rangeland. After harvest, the cropping lands are available to all stock in the community for communal grazing. Some opportunistic farmers, as often practiced in the Sahelian countries, also practice a sort of transhumance. They plant crop, usually maize, on their way east to wet season pasture and harvest them on their way back west in the dry season.

Daniel Teklehaimanot nominated for Best African Sportsman of the Year