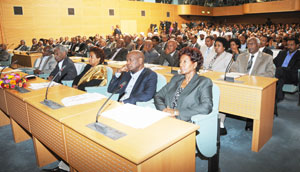 The Second National Investment Conference opened today here in the capital under the theme: “Popular Development, by the People to the People.”

Asmara, 17 December 2012 – The Second National Investment Conference opened today here in the capital under the theme: “Popular Development, by the People to the People.”

In an opening speech at the conference in which more than 700 citizen entrepreneurs residing in the country and abroad are participating, Dr. Woldai Futur, Head of the National Investment Center, said that such impressive participation attests to the prevalence of spirit of nationalism among the citizenry and their abiding attachment to the Homeland. He further gave detailed briefings regarding national investment policies and the new prospects to this end.

In a statement he presented pertaining to national fiscal policy, the Minister of Finance, Mr. Berhane Habtemariam, indicated that the Eritrean

government would make adjustments in this regard with a view to ensuring economic growth through encouraging investment. Accordingly, preparations are being made to implement the adjustments as of the beginning of the year 2013.

The two-day conference is due to conduct extensive discussion as regards ways and means of fostering citizen participation in the national economy, investment prospects related to the domains of agriculture, manufacturing and tourism, as well as investment of pension fund. It would also deal with enhancing women’s role in national entrepreneurial activities, according to reports.

It is to be recalled that the First National Investment Conference was conducted from 27 to 28 August this year here in the capital.