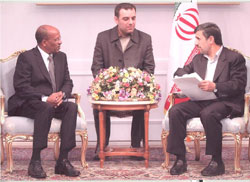 Mr. Mohammed-Seid Mantai has been appointed as Eritrea’s roving Ambassador to the Republic of Iran and presented his credentials today to President Mohammed Ahmadinejad.

Asmara, 18 December 2012 – Mr. Mohammed-Seid Mantai has been appointed as Eritrea’s roving Ambassador to the Republic of Iran and presented his credentials today to President Mohammed Ahmadinejad.

Ambassador Mohammed-Seid conveyed President Isaias Afwerki’s greetings to President Ahmadinejad, and asserted that he would do his level best in reinforcing bilateral relations.

Meanwhile, in a meeting he held yesterday with Mr. Ali Akbar Salihi, the Iranian Foreign Minister, Ambassador Mohammed-Seid indicated that the Eritrean government is working on priority

basis in the development of the agriculture sector and human resource, besides laying the necessary infrastructure in this regard. He further elucidated that Eritrea has visibly encouraged investment in the mining sector, and pointed out that collaboration of stakeholders is vital to this end.

Mr. Ali Akbar Salihi said that reinforcement of diplomatic efforts on both parties is a major prerequisite in the further development of Eritrean-Iranian relations, and that Iran would exert the necessary endeavors to this end.

Implementation of set government projects for 2013 would go into effect: President Isaias