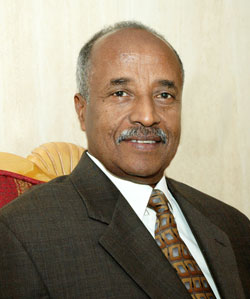 In a speech he delivered at the summit conference held under the theme “The Future of ACP Group in a Challenging World: Challenges and Opportunities,” Minister Osman pointed out that the existing preferential relations of cooperation between the ACP countries and the EU is affected by major factors of global scope. He further stressed the need for Member States to overcome the shared challenges through reinforcing their unity, ensuring mechanisms for common discussion and promoting their shared stance vis-à-vis fostering functional and vision-oriented collaboration with stakeholders.

As regards the structural challenges vis-à-vis relations between the ACP Member States and the EU, the Foreign Minister elucidated that the methods employed towards holding political discussion and the measures taken on that basis are both asymmetrical and unjust. Furthermore, Mr. Osman underlined the need for applying the necessary scrutiny in meetings organized by ACP members with a view to tackling reservations facing the Group so that equity and fairness may prevail.

He further noted the significance of mutual understanding between the two partners, namely the ACP and the EU, in the context of Economic Partnership Agreement, and explained that the holding of regular consultations in the political, security and other spheres would give added impetus to mutual cooperation.

Stating that resort to the ploy of agenda manipulation in the name of partnership often leads to negative outcome in development endeavors, the Foreign Minister emphasized that such a tendency should be given serious attention as it is contrary to the fundamental principles and objectives of fostering sustainable partnership.