Livestock Population and Types of Eritrea 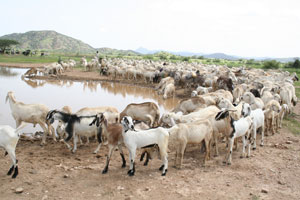 Reliable statistics are lacking on current livestock populations as demonstrated by cattle vaccination figures, which are often more than double registered population. No livestock census has been carried out since 1978, and the current livestock figures are based on estimates. At present there are 1.9 million cattle, 2.1 million sheep, 4.7 million goats, 318,914 camels, 518,459 equine and 1.1 million poultry.

Cattle: The known zebu cattle breeds or types of Eritrea are:

Begait (Barka): Barka is dominant in the Gash-Barka region. They rank first in population size as compared to the other types. Milk and meat are the main products of this breed. The Barka is a long legged black and white breed originating in the Barka region. It has been spread to many areas on account of its milking qualities: daily yields of 6 to 8 liters are reported as general. They are relatively resistant to diseases and are also known for their high feed conversion rate making them good meat producers. Mature body weight ranges from 267 to 316 Kg.

Arado: The central highlands of the country are home for this breed and they are second to Barka in population. The main purpose of rearing is for meat and draft power? their milking potential is about 1 to 2 liters per day. Their mature body weight ranges from 205 to 300 Kg.

Arebo: The coastal plains of Northern Red Sea are home for this breed of cattle, although numerically less important than the other breeds, it reportedly has a similar milking capacity and crossing potential as that of the Barka. Their mature body weight does not exceed 250 Kg.

Afar: The coastal plains of Southern Red Sea are home for this breed of cattle. This breed has compact body size and is few in number compared to the Barka and Arado. Their milking potential is almost similar to that of Arado. Their mature body weight ranges from 220 to 250 Kg.

Goats: Most of the Eritrean goats are unidentified and several types and strains are seen in the country. The most notable is the Rora goat: it is similar in appearance to the Nubian with drooping ears and a milking capacity of more than one liter per day. Average live body weight ranges from 24 to 31 Kg.

The Barka is the preferred breed in the Gash-Barka region. Average milk production is estimated at1 to 1.5 liters per day. The Shukria are mainly found in the western lowlands. This strain reportedly produces 1.5 to 2.5 liters per day and their milking potential warrants their trial introduction to other areas.

The Hassani is well known for its milk production: it was introduced from the Sudan and is characterized by long hairs. Average body weight ranges from 30 to 34 Kg. The Maria is found in Anseba region and has short, round ears. Average milk yield is 1 to 1.5 liters per day. Average body weight ranges from 27 to 30 Kg. The Lange is a milk producer found in Gash-Barka region. It is similar in body weight as the Hassani.
.
The Beledi is a cross breed of Lange and Hassani. There are also unidentified mountain type goats in the central highlands.

Sheep: All breeds are hairy types. Although all the breeds are primarily for meat production, they are also often milked for subsistence consumption.

The Barka type of the Western lowlands zone is the most commonly known type of sheep in Eritrea. It is long thin tailed. The body weight ranges from 42 to 47 Kg.

The Hamale is similar to the Sudan Desert sheep and prevalent in the Western Lowlands. The body weight ranges from 37 to 40 Kg.

Donkeys: They are of two types. The highland donkeys and the low land riding donkeys commonly called the Rifa’i.

Camels: The most common ones are the Bisharri, Arrir and Afar camels. There are also unidentified camels in the Gash-Barka and Anseba regions. The Arrir is the preferred type in the southwestern lowlands due to its high milk yield, good market price and high transportation value.

Workshop conducts in Massawa to assess capacity of students