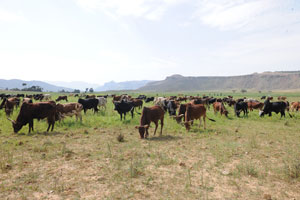 Rangeland is a kind of land characterized by native vegetation (climax or natural potential), which is predominantly composed of grasses, grass like plants, forbs, or shrubs suitable for grazing and/or browsing. It includes land re-vegetated naturally or artificially to provide a forage cover that is managed like native vegetation. Rangeland includes natural grasslands, savannahs, shrub lands, most deserts, tundra, alpine communities, coastal marshes and wet meadows.

Generally, rangelands are frequently characterized as receiving less than 750 mm average rainfall, but also include areas with higher amounts where soil and topographies are unsuitable for cultivation.

Rangeland is more suited for livestock production than for any other forms of agriculture i.e., they are limited with regard to agricultural production, but they are capable of producing a great variety and quantity of herbage plants that serve as the basis for the extensive types of livestock Industry.

The status of the different rangelands can be stated as follows: Central Highlands: The rangelands in the Central Highland Zone are generally infertile and usually extremely sloping, making them extremely fragile under any continuous grazing. Many show irreparable damage from erosion down to bedrock due to constant grazing and removal of the woody over story. The grazing area has been shrinking over years because of cultivation and deforestation. Attempts to allow regeneration by closing rangelands and forest areas have shown promising results and are becoming models for the recovery of the rangelands. The recovery rate of some of the closed rangelands and forest areas is remarkable and this is making people think in terms of introducing the cut and carry system.

Western Lowlands: The southwestern part of the western lowlands appears to be less damaged, except in those areas adjacent to population centers where bare soil with extensive gully erosion is common. There is still grass cover with stable browse over story. But in the northwestern lowlands the grass cover becomes relatively scarcer. The intensity of use of forage in the Western Lowland Zone increases to the northeast, leaving little grass and showing consequent erosion. Land degradation under cropping follows the same pattern in this zone with least damage on the flat vertisols of the southwest.  The extensive and migratory system of animal husbandry allows the rangelands to recover, unlike in the highlands. But it is common to observe overgrazing in areas where there are watering points and under grazing in areas where there are no watering points.

of the ground cover of vegetation.

After the rangelands, crop residues are the most important feed resources. Almost every farmer in the highlands and the agro-pastoralists in the lowlands store straw, mainly of barley, wheat and taff and Stover mainly of sorghum to feed their animals during the dry season.

The aftermath grazing of harvested fields also give the animals a chance to supplement their grazing and browsing in the rangelands and enable the rangelands to rest for some weeks.