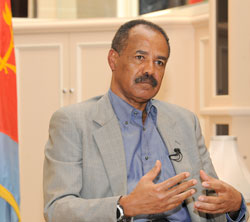 President Isaias Afwerki said that the sanctions resolution and other forms of conspiracy against Eritrea have not only reinforced the people’s unity and spirit of resistance but also ended up in fiasco.

Asmara, 29 December 2012 – President Isaias Afwerki said that the sanctions resolution and other forms of conspiracy against Eritrea have not only reinforced the people’s unity and spirit of resistance but also ended up in fiasco.

The President made the salient remarks in the second part of the interview he conducted tonight with the national media outlets in connection with the New Year. He pointed out that the international community, the United Nations, the UN Security Council, the African Union, the AU Peace and Security Council and the IGAD have no hand at all in the adoption of the US-instigated sanctions resolution adopted in the name of the UN Security Council. President Isaias further underlined that the resolution is but a continuation of the anti-Eritrea enemy strategy over the past 5 decades.  He went on to emphasize that as such a resolution is rooted in baseless issues and unfounded allegations, it ended up in utter failure thanks to the Eritrean people’s staunch resistance and the nation’s development accomplishments, thus giving rise to frustration on the part of its authors.

President Isaias explained that the illegal and unjust resolution against Eritrea also targets the Horn of Africa region with a view to serving Washington’s hegemonic, adventurous and exploitative policies and agendas. Hence, the prevailing problems and crisis situations being witnessed in various countries of the region are but the consequence of the aforementioned US agenda, he elaborated.

Moreover, the President underscored that the enemy quarters have been engaged in organizing human trafficking of Eritrean nationals in general and the youth in particular in a futile bid of draining the nation’s resources, besides weakening the Eritrean people who frustrated their conspiracy. In this connection, he indicated that the major intelligence agencies were openly involved in this act in violation of international law and human rights under the guise of UN bodies, the Red Cross and other NGOs. Despite this, however, the Eritrean youths did not fall prey to such a trap and thus kept intact their loyalty to the nation and the people, he added. The President further noted that this patriotic stance has caused frustration and bankruptcy within enemy ranks.

As regards the so-called call for negotiation on the part of Ethiopian officials following the change of persons in power recently, President Isaias said that Eritrea would not associate issues with the passing away of individuals, and that this inclination is against Eritrea’s political culture and values. He further explained that Eritrea is fully aware of the source of such utterance, and that it would not serve any purpose other than a public relations gimmick. The President went on to stress that Eritrea is not at all ready to engage in such kind of drama.

He also underscored that even though a legal ruling has been given to the Eritrea-Ethiopia border issue, the implementation of the EEBC ruling on border delimitation has nonetheless been impeded, and that sovereign Eritrean territories remain under Ethiopian occupation as the US Administration views the cooperation and co-existence of the two peoples as a threat to its strategic interest. First and foremost, the rule of law should be respected and an end be put to the illegal occupation, he stressed.

Furthermore, President Isaias gave extensive briefing as regards the ongoing popular opposition in Ethiopia, the issues of Somalia and the two Sudans, as well as the fabricated story about the existence of Israeli and Iranian military bases in the Red Sea coast and Eritrean islands, in addition to the uprising in the Arab world.