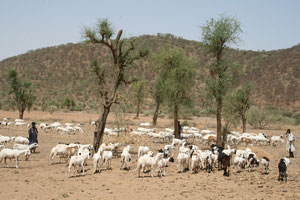 The pastoralists derive more than 50% of their total food energy intake from livestock in the form of meat and milk. Milk is the most important animal product in pastoral societies and is needed every day. Most cows conceive usually once every two to three years and provide little milk during the dry season. Females comprising more than 75% of the livestock number always dominate the herd size. This reflects the pertinence of milk as the major end product of pastoral production systems. The herd also enables the production of revenue for the subsistence of the family.

Increased herd size and milk production, maintenance of an appropriate and viable herd structure and prevention of animal loss to disease have always been the core objectives of pastoralism. These are some of the reasons why large number of animals must be maintained.

As an insurance against drought, pastoralists strive to increase stock numbers, in order to provide security in case of losses, to leave a remainder of feasible size, to rebuild their herd. Thus the expansion of herd sizes in “normal” times, not stricken by drought, disease or unrest, is a rational strategy and not a projection of prestige, social status and wealth. Although it is true, that parallel to increased numbers of animals, an increased social standing for the owner will develop, this has to be seen as a favorable byproduct of an effort to safeguard future survival.

Traditionally risk reducing adaptive strategies is herd diversification and herd dispersion. Herd diversification is practiced as an insurance against major disease outbreaks since the different domestic species are generally not susceptible to the same pathogens. Beside this, the different dietary preferences of the various domestic species also allows for a better utilization of pastures that may not be suited for one or the other domestic herbivore

Herd dispersion is a second risk reducing strategy, which is frequently practiced in traditional systems. Stockowners separate their herds and have them herded in areas sometimes up to several hundred kilometers apart? this is primarily a measure against forage shortages and raiding. If the family is large enough, its members manage the different herding units, and family reunions and rearrangements of the different stock sections take place either during the rainy season or during certain ritual occasions.

A related form of dispersion, although of a different significance is the formation of stock alliances and stock patronage that is independent of family size and social status. Individual animals or groups of animals are given out to other stockowners who are either needy or in some way entitled to compensatory claims. Often the original owner never recovers the animals, but in times of hardship the son or even grandson might reclaim some or even all of the loaned stock from the recipient’s heirs. This risk reducing strategy is common among all pastoralists whose social organization is based on clan and age set structures and should be regarded as a system of social security rather than an actual management tool.

The most conspicuous strategy of migratory pastoral production system was, and still is, the mobility of households and herds. The migrations, which are dictated by the availability of forage and water, can follow various patterns but are always characterized by the combination of individual stock ownership and communal land use. This combination does not usually promote sustained yield resource exploitation whenever land becomes scarce, and in particular when dry season grazing reserves are no longer accessible. If confined to rainy season pastures throughout the year, the mobility of pastoral households and herds will be reduced to only minor moves, for hygienic or ritual seasons, since energy expenditure for a majority move is not compensated for by a significant improvement of pastures.

At this point it should be noticed, that the term “modern” does not apply solely to recent or present developments, though for most African pastoralists it coincides with the respective dates of independence.

Particularly those pastoralists that become impoverished after devastating droughts may be able to reestablish themselves in the pastoral sector through various social mechanisms (stock alliances, stock patronage), will turn to irrigation agriculture, where development projects are in operation, seek wage labour (usually in low income brackets) or attempt to live on famine relief.

These alternatives, especially the latter two, are of steadily increasing importance since the recuperative potential of the traditional livestock economies is declining for the already indicated reasons. On the other hand, many wealthy pastoralists are successfully investing in non-pastoral sectors by engaging themselves in trade and business using the structure of the remnant economy to stimulate local markets for foreign goods (petty trade). Formal education and training is also seen as another form of capital investment as it increases the chance for jobs in the higher income brackets that in turn are the only ones to allow reinvestment in the pastoral sector. Thus, the recuperative potential of the pastoral sector is augmented by non-pastoral activities, though limited to small portions of the population. Today, roughly most of the pastoralists are living below the poverty line, that is to say, are not self reliant in terms of food production. Only a very small minority of the pastoral population are able to diversify their economic activities into non-pastoral sectors.