The Massawa museum: wonderful source for the history of the region 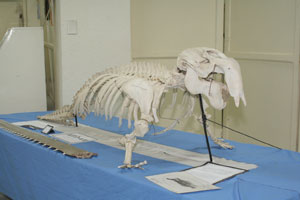 Museum is one alternative place or a building in which historical, cultural, scientific and archeological treasures of one country are kept and displayed to the public. Museums collect and care for objects of historical importance and make them available for public viewing through exhibits that may be permanent or temporary. The other alternative of keeping artifacts of value is to let them stay at their place of origin and oversee them so that they are not taken away by individuals or are not deteriorating due to natural and manmade interferences.

Early museums began as the private collection of wealthy individuals, families or institutions of art and rare or curious natural objects and artifacts. The first public museum in the world opened in Europe during the 18th century and the Age of Enlightenment. Ever since, large museums have been established in almost all major cities of the world with the aim of acquainting nation’s historical treasures to the local and international public as means of promoting their tourism industry.

In Eritrea, even though a museum with small scale standard has been established beginning from the Italian colonial era, it was in 1992 that the National Museum of Eritrea was officially established as a museum of a sovereign country. Besides the National Museum the other regions of the country have been also trying to establish regional museums in their respective administrative cities aimed at displaying their cultures, traditions and history of their regions. So far the most successful regional museum is the Northern Red Sea regional museum in Massawa.

The Northern Red Sea Museum was established in 2000 during the 10th anniversary of the liberation of Massawa. The Massawa Museum consist different sections including Natural History, Archeological, Ethnographic, Colonial Art and Military sections.

Natural History Section: The Red Sea of Eritrea is endowed with more than 1000 species of fish, around 200 corals and about 800 different kinds of shells. Small part of the rich sea resources is represented in the natural history section. The 14m long skeleton of a whale, skeleton of a dugong and other samples of fishes, corals, shells, and sea turtles that are displayed in the museum are few examples which create vistors the opportunity of getting acquainted themselves with what the sea is holding inside it.

Archeological Section: The Northern Red Sea region is home for the first homo sapience so far revealed in Buya. Adulis and Dahlak Islands are also places where we could find remains stretching back to prehistory and Islamic

civilization. The unique relics of around 1.2 million years old stone tools, large amount of fossilized bones of extinct animals are displayed in the museum. Different archeological findings from Adulis, ancient Arab calligraphic writings which are artistically engraved at tombs that include Holly scripts and details of the deceased are meticulously displayed and open for public in the Northern Red Sea Museum.

Ethnographic Section: Out of the nine ethnic groups of Eritrea, six are found in the Northern Red Sea region. This section, hence, holds the household utensils, ornaments, traditional costumes, house decoration materials, traditional self-defense tools of all the six ethnic groups inhabiting in the region. With a stay of not more than thirty minutes in the museum one could learn and know much about the living standard, custom and tradition of the inhabitants of the Northern Red Sea region. Much more, one could also observe the diversity and unity of the people.

Colonial Art Section: This section includes colonial buildings with Turkish, Egyptian and Italian architectural styles. The photographs of the buildings are displayed in the museum, however, they are still intact and any one interested could visit them and enjoy their antiquity.

Military Section: This part of the museum includes the hard ware the EPLF fighters were using to combat and route out the occupation army of Ethiopia from Eritrea and save the country and its people from suffering in the hand of colonizers. This part of the museum also reflects the bitterness of the struggle for independence, the resilience and creativity of the liberation fighters, and the viciousness of enemy.

The Northern Red Sea Museum holds the history of the region from the times of pre-history to the modern day Massawa and the developmental activities in the region. The prospect is that with the ongoing developmental activities in the region, and for that matter in the whole country, Eritrea will be economically well advanced in the near future. And to justify this one has at least go and visit the Northern Red Sea Museum.