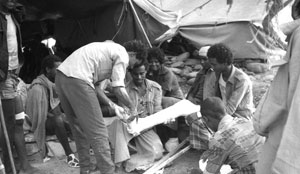 Although literacy and academic education are basic in the task of upgrading the cultural level of the Eritrean people, the EPLF was also engaged in a successful program of training the masses in agriculture, construction and other technical fields. In music, fine arts, handcrafts, literature and sports, serious  efforts has been made to encourage a cultural awakening that would give prominence to the history and glory of the nation and promote nation-building and unity. Advances have been made in this field.

The establishment and expansion of health services to protect the health of the people improve their living conditions and enhance their capacity for work and production has remained one of the main tasks of the EPLF. The Eritrean people have suffered from colonial atrocities and oppressive psychological pressure. They have been prevented, by massive emigration, from exploiting their national resources to improve their living conditions and protect their health. This has led to their increasing impoverishment. Furthermore, persistent drought had worsened the misery of the people, diminished the fertility of the land, decrease agricultural production and drastically reduced animal resources. As a consequence of the devastation caused by colonialism and natural calamities the health of the Eritrean people was deteriorating, the birth rate was declining and the death rate climbing.  The lot of children, women, and old people has been particularly harsh. Under such wretched conditions the demand for health and medical services was great indeed.

To meet the demand the EPLF worked vigorously to expand its health services. Before the strategic withdrawal, although human and material resources at its disposal were limited, it had started to provide proper hospital services, set up clinics in the liberated towns and many parts of the rural areas. Even though, the spread and growth of health services like all other activities contracted for a limited period after the withdrawal, it subsequently saw marked resurgence and development.

In the secure area, many hospitals have been set up and the services they provide have improved tremendously. In the liberated and semi liberated zones too, the number of stationary and mobile clinics and their services have grown. These serve not only the surrounding people but also who live in the enemy controlled areas as well as Eritrean refugee in the Sudan. The same holds true for the mobile teams of bare-foot doctors.

The expansion of health service requires a properly organized staff of trained medical personnel. Fortunately, many Eritrean doctors and other medical workers who had been educated and had practiced in Eritrea and abroad

chose to join the struggle to serve the people. The growing participation and contribution of foreign voluntary doctors and medical organizations has also covered many shortcomings. Programs deigned to train bare-foot doctors, mid-wives and other personnel have been regularly implemented and the trainees have been making substantial contributions at the lower level. The Eritrean Medical Association was set up to upgrade the number and capability of skilled personnel by organizing and facilitating the participation and contribution of Eritrean living at home and abroad as well as that of foreigners. Since its establishment EMA has been playing an active and supportive role.

Moreover, as the training and increase in the number of health professionals was not in itself enough, health education has been provided to the population alongside political education. Regular as well as periodic publications have been issued to raise the health consciousness of the masses and to generate their active cooperation. This campaign has been effective in accomplishing its objective.

It gives me great pleasure to transmit what I know