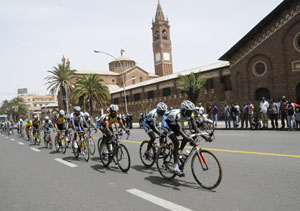 Reports indicated that one of the tournaments, “Fenkil Challenge,” is being organized in connection with the commemoration of Operation Fenkil on February 16 and 17, memorialization of a conclusive battle that liberated the port city of Massawa once and forever from the hands of Ethiopian occupation forces. Furthermore, a tournament entitled “Asmara Circuito” would be conducted along the streets of Asmara city on the 24th of the same month preceding Tour Eritrea which includes 4 stages.

In a statement he made before leaving for Gabon along with the National Cycling Team, Mr. Mussie Asehel, the coach, said that the team anticipates to demonstrate triumph in the tournaments here in the Homeland.