It gives me great pleasure to transmit what I know 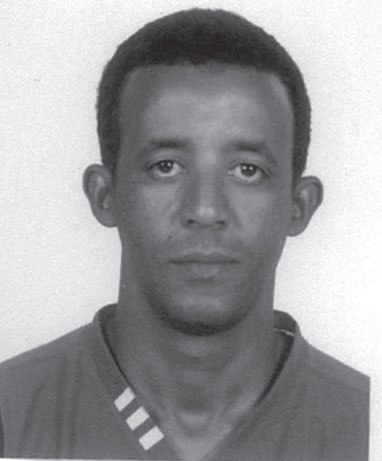 Henok yohannes was born in 1979 in Asmara around Geza Banda. Upon finishing his high school studies he went to Sawa for military training. He was later assigned as a volleyball coach I one of the military units. Late coaching became his profession.

-How did you start being interested in this kind of sports?

As a kid I always played volleyball with my neighbors. And when I was in junior high school I started playing representing my school. I guess this is when I started taking this sport as a profession and not as a hobby. By the time I was in high school I entered a regional team called Adulis. In other words I played the game since I was able to walk.

-When did you become a coach?

It was technically an on and off thing. I was coaching a small team sponsored by the national union of women when I was still in high school. After I went to Sawa I went back to playing till 1997. Afterwards I was deployed to the army where I re-started coaching again till 2001.

-Was it not hard to play both the roles of the player and the coach?

I play the game because I love the sport. it is a big part of my life and I can never picture my life without the occasional kick of the ball. At the same time though it gives me great pleasure to transmit what I know, together with the talent the kids have it produces a wonderful team. As every teacher knows the utmost satisfaction we have is when we see our students become something extraordinary.

-Did you receive any courses on coaching?

I went to Switzerland a month ago, I also went to India and not too long ago a lot of coaches came from Egypt, Germany and other places. That was a great opportunity for me, I learned a lot from it as we shared a lot of

-Now a more personal question, how do you think this sport is doing on a national level?

Even though it has a very fundamental history I can’t proudly say that it is one of the sports that is followed the most.  Our national team hasn’t gone for any international competitions and nationally volleyball is ranked fourth after cycling, athletics and football.

-It is definite that something must be done to improve its current situation. What do you suggest?

We absolutely have to come up with a well-structured strategy. And I think that the National Commission of Sports and the Ministry of Tourism should put more interest and discuss profoundly on the changes could be done

-You traveled a lot. Did you have any impressions?

-Alright Henok I would like to thank you for your time. I wish you success throughout your carrier