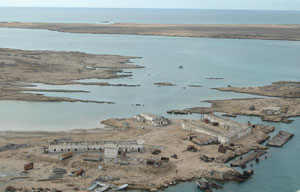 Dahlak Kebir, one of the more than 360 islands in the Red Sea of Eritrea, is one of the important historical and archeological sites in Eritrea. Dahlak Kebir is historical place for it holds Arab calligraphic writings, which are artistically and marvelously engraved at tomb stones, about 360 wells dug at hard coral rocks, and natural beauty.

Dahlak Island with its strategic position in the Red Sea was used as a harbor for trade transactions between the Arabian Peninsula, the Far East and part of the African mainland after the fall of Adulis in the 17th to 18th c. AD.

According to history books, beginning from the second millennium the Red Sea was the main trade route connecting the Horn of Africa, the Mediterranean Sea and India. The history of Dahlak Kebir could be traced from the Axumite to the Ottoman periods with the physical remains that still exist on the ground in the island including the ancient Turkish and Islamic ruins, Axumite buildings, Arab inscriptions, the monumental reservoirs, the 365 ancient water wells and archeological materials scattered on the surface of the settlements. The remains of the well formed building pillars indicate that they were building structures from the early Christian Churches of the 4th century

AD, the period during which Christianity was introduced in the Axumite kingdom.

These remains could bear evidence to the fact that the history of the island goes back to the past centuries. Hence, the socioeconomic and cultural history of the island could be associated within the broader context of the civilizations that existed during the Roman and Ottoman Empires as well as the Axumite times.

History also tells us that in the early 7th century, some followers of the Prophet Mohammed escaped from persecution at the hands of the then leaders in Mecca to the other side of the Red Sea and took refuge in the present day Eritrea and were well received by the inhabitants. Dahlak is, hence, the gateway for the spread of Islam in this part of Africa.

Historians also believe that slaves from the Horn and other parts of Africa were exported in significant numbers through the main ports of Dahlak to the Middle East. It is said that during the Ottoman Turks rule over the area settlements flourished at the Dahlak Islands and became the major slave trade route.

Dahlak as it is rich in ancient remains which could stretch as early as Axumite Kingdom is largely untouched and waiting for researchers and archeologists to exploit its rich history.

The water management system the ancient dwellers of the Island is another phenomenal experience that could be learned by the present inhabitants of the area. The 365 water

wells from which the population traditionally received its water supply were well known for centuries. The wells (cisterns) are located on a flat rocky area and have some kind of small canals for channeling rain water to the wells.

These 365 wells were intended to be used one well for one day and each well will supply the inhabitants water for a year long. Such was the water management the inhabitants used for survival in the midst of the desert