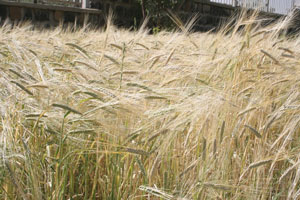 Making assessments help one to see what the pros and cons of the past undertakings were and to chart out more effective programs that could help jump to a higher level of performance at individual or national level. So, the assessment meetings conducted in the southern and central regions just highlighted the overall developments activities carried out in 2012.

Owing to the introduction of advanced and integrated farm practice, in the central region abundant yield has been harvested in 2012.  Prior to the introduction of such advanced farm system, it should be noted that only 10 quintals of cereal crops per hectare used to be harvested annually. One could easily notice the difference that unlike in the previous years, around 50 quintals of cereal crops per hectare has been gathered in 2012.Through conducting technology assisted farm activities; four species of wheat that could be used in bakeries and also in pasta factories have been harvested in abundance just from small farm plots.

As part of reforestation programs that has been carried out nationwide, the central region has in the 2012 planted 1.3 million seedlings in 390 hectares. Eng. Abrham Daniel, head of Agriculture Ministry’s Branch office in the central region, said that the dams constructed in Embeyto and Ade-Beney at 10 million Nakfa has a capacity to

cultivate around 80 hectares.  What is more is that modern irrigation infrastructure has been put in place in about 120 hectares of farm areas.

Besides the aforementioned achievement registered in the agriculture sector, in the central region, varied welfare programs worth 100 million Nakfa has been implemented in 2012. Among the programs carried out in 2012 include: giving assistance to the families of the fallen heroes, nurturing orphanages, providing monetary assistance to people with disabilities and students who face difficulties to continue education due to familial meager

In 2012, agricultural activities worth 100 million Nakfa carried out in the southern region.  According to Mr. Bahta Tedros , head of Agriculture Ministry’s Branch office in the southern region, encouraging achievements have been registered in different major agricultural projects in 2012.The overall agricultural activities conducted in the entire region include construction of dams and water diversion canals, reforestation, cultivation of green animal feed among others.

In connection with the integrated reforestation programs, the inhabitants of the southern region have planted 1.7 million seedlings and out of which the 87% are in good condition. Initiatives taken by the region’s association of farm and dairy products has made due contribution to the increase of diary production by 12% as compared to prior years. Vegetables and fruits harvest has also shown a growth of 16% and that of poultry an increase of 33%.

The minister of Agriculture, Arafayne Berhe, in the assessment meeting held in Mendefera, said that the advances made in livestock and in vegetables and fruits farming have been exemplary. “Owing to efforts exerted by exemplary farmers, the outcome registered in varied select seeds of wheat introduced in the region just for the experimentation has been very encouraging,” the Minister said.

The overall development programs carried out in the Southern region in putting in place the necessary infrastructure such as in the development of transportation service, supply of electricity, installation of public telephones, and supply of potable water, agricultural activities like vegetables and fruits farm and also diary production have been among the achievements that changed people’s living standards.

Though not the ultimate, what has been achieved in development programs of the central and southern regions is of a paramount importance. Any sort of progress is governed by its own pace, some are very speedy and others are very gradual. The nature of life changing development programs is by default gradual.