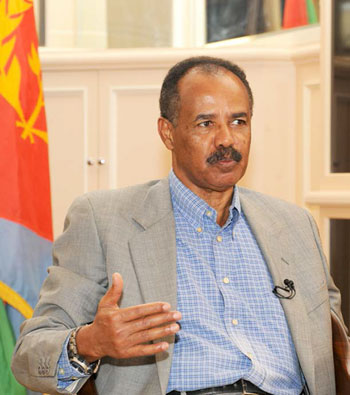 It is to be recalled that President Isaias Afwerki conducted an extensive interview on the occasion of New Year with national media outlets on 28th and 29th of December 2012. The interview focused on national development programs, political and diplomatic developments in the Horn and Eritrea’s stance and outlook on different scenarios as well as other local, regional and global issues. Second part of Excerpts of the interview follows:

We are in the earliest stage of the journey towards creating an economy that enables us to provide our citizens with enabling environment for promoting their living standard. This is a demanding stage. Some governments tend to privatize electricity and other sectors. This perspective is surprisingly inapplicable in the case of economies that are at their early stages as ours. In the last 20 years, we (both the public and the private sectors) have achieved a lot in instituting enabling infrastructure that is useful for providing the citizens with the equitable opportunities that help them improve the quality and standard of their life and to play an active role in developing the economy.

So we need to be aware of the stages that require different dimensions of involvement. We should not be misguided about the roles of the public sector and the private sector. That is to say that there are no separate responsibilities that are exclusively assumed either by the government or the private sector. Our principles have not been changed both during the struggle for independence and now. The ultimate goal is improving the living standard of the people. In this case, the roles of the two sectors have to complement each other. Now the government is arranging conventions and conferences for creating new opportunities and for introducing new policies. Has an effective environment been provided for Eritrean citizens to take active part in the economy? The Eritrean citizens are doing their best for the realization of development goals –that is for recovering the economy. This is the most important part of what can be done privately. The responsibility of the government is ensuring the availability or provision of road networks, electric services, communication facilities, essential educational services as well as health services and other important services. These are part of the mandatory responsibilities of the government. When we say the government has to provide these things, all the citizens, as part of the private sector, have to do their best to improve their living standard and to realize economic development goals in the country by making effective use of the opportunities provided by the government. I feel what is said about the private sector and the public sector is just rhetoric. In our case, both in the programs and strategies of the PFDJ as well as those of the government nothing has been changed. There is no need to change certain principles for realizing development goals. Rather the central issue is how we create opportunities. For example, if a farmer used to employ traditional mechanisms of production, now he or she must use modern means of production (tractors and other new technologies) for quantitatively and qualitatively improving what he or she has to produce. How do you create such a possibility? Making profits in millions by borrowing millions of money from national banks as well as external banks in a way that is not consistent with our national policies and the way of doing things in the country is not thinkable. Our national policies place more emphasis on realizing the overall needs of the citizens. Anybody who intends to exploit the national resources, so as to materialize his or her own privately defined interests, in a way that is not consistent with our policies is not allowed to do so.

What are the reasons or new developments that have led towards revising certain policies and what are the policies that have been or are being revised?

We just want to further coordinate and evaluate the roles of the Eritrean citizens living inside and outside the country for realizing development goals. It is for this reason that we arranged conferences. For example, during the struggle for independence a conference was conducted at Afabet with the purpose just to discuss the possibility for the citizens to contribute in the economy by establishing companies. As a result, Nakfa Corporation was established then. However, that corporation built only one building. There are such experiences. Thereafter, some citizens from the Diaspora also carried out certain activities related to building houses. Even this project, as experience, was also not that effective. There was also a process of privatizing some we intend to adjust the way we do things by rectifying the limitations that make what we do less effective. But our policies remain the same. Evaluating our experiences and our weaknesses will be very useful for planning purposes and for designing projects. After 20 years, there have been many opportunities provided to the citizens residing in Eritrea and outside Eritrea. But the citizens need to be properly aware of such opportunities and the enabling environment for making use of these opportunities. One may have millions of dollars and he or she may be able to undertake many projects, but all those who intend to take certain initiatives must be provided with incentives and support.

It has to be noted that given all the said challenges and problems, we are still continuing with the process detailed above. The reasons for failure are not mainly associated with either those citizens who are involved in the process or with the miscalculation on the part of the government. It is mainly due to the war that has been declared against us. However, regardless of the challenges we face, we need to move forward by continuously

evaluating our policies and experiences.

An important issue that is raised in relation to investment is the issue of land management. When it comes to the land usage rights in Eritrea, there is a clear policy and proclamations have been declared long ago in relation to this important concern. But there are some problems associated with the actual management (implementation) and supervision in connection to the said issue. Yet no steps have been so far taken to overcome these problems. Consequently, it is felt that it may be too late and too difficult to deal with the problems now as the problems have been cumulatively and seriously complicated. How do you see this? Further, in relation to what we intend to do about investment, how are the issues related to land to be allotted for Tiesa, residential purpose, for agricultural purposes, and for manufacturing purposes to be handled by healing the problems associated with land distribution?

In the last 20 years, we have learned many lessons and these lessons are not about the people in general. Generally, the good will and cultural values of the people should not be related to what I am saying about this issue.To the contrary, there are a handful of individuals who tend to do contrary to what the government and the people often do. This is part of grave corruption and we need to check it and deal with it continuously. We should not be surprised that such individuals exist within the society. Those who are doing anything contrary to what has been stated in our policies and to what we intend to do as a state may tend to mistakenly feel that they are not going to be identified and checked. They may assume the government and its units may not actually have the capacity to closely supervise what they happen to do and accordingly take the right actions they deserve. Regardless of how long time it may take, such mischievous behavior is going to be certainly checked and those who are involved in the misuse of land are going to be responsible for their acts.

The issue should not be examined taking into account only those who are said to be the main causes of land misuse. Those who are involved in the case this way or the other will also be accountable to what they did.