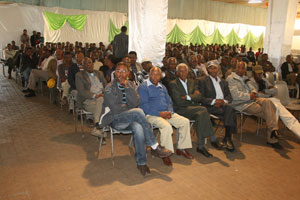 The Association of Taxi Owners in the Central region yesterday held Third Congress in Asmara.

Asmara, 18 January 2013 – The Association of Taxi Owners in the Central region yesterday held Third Congress in Asmara. Mr. Woldu Gebremariam, Chairman of the Association, explained that it has been organizing seminars in collaboration with stakeholders with a view to raising the awareness of members pertaining to various issues, besides the endeavors made to ensure traffic safety.

The Association also provided an opportunity for members to collectively obtain insurance membership, while more taxis have been imported and got licensed last year.

The Association members lauded the government for subsidizing their fuel expense so as to promote public transport. Moreover, they conducted in-depth discussion as regards various issues, besides electing a 15-member managing committee that would serve for 2 years.

In closing remarks, Lt. Colonel Yosef Mekonen, head of urban and rural public transport, indicated that the views put forth at the meeting remind the members of the weighty responsibility their duty involves. He further called on them to abide by the rules and regulations of the Association, including that of handling transportation fees.

The Association has 828 members, according to reports.

Another meeting of regional Administrators conducted