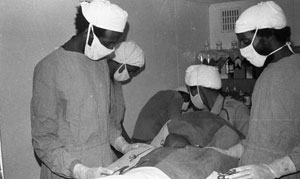 Another basic problem in health service was the shortage of medicine. Providing free health care to the people was the declared policy of the EPLF. But given the limited capability of the organization, it was impossible to provide free and adequate service to all. Neither can the impoverished people afford to buy medicine or pay for medical examinations. The available medicines, mostly donated and some purchase from abroad, cannot satisfy the minimum requirements of the health services.

The importance of domestic manufacturing of basic drug was therefore recognized and a pharmaceutical plant was established. The production capacity and quality levels of the plant have been growing lined its output of intra-venous fluids. Important capsules and pills as well as external preparations (syrups, ointments etc.) were attenuating many problems.

To satisfy the demand for medical instrument and equipment, serious efforts was put into the production of what could be locally and easily made from available resources, while a continuous campaign to obtain adequate quantities of modern medical equipment from foreign sources has been formulated and implemented. With the assistance of friends and aid organizations, an infant food plant was set up to alleviate the lack of nutritious food which is a major cause of infant disease, as well as sanitary towels plant and workshop for making artificial limbs.

The EPLF’s health service was one of the sectors which had achieved amazing progress in the past decade. And yet, the devastation of war has been a constraint on the expansion of the service. Moreover, when viewed in

light of the need for a general improvement of the living and health conditions, which was conditional on the supply of nutritious food and clean water for drinking and sanitation, the service was still at low level.

The social problem resulting from war and natural calamities such as drought were innumerable. Back wardens itself creates social problems. These causes produce refugee, orphans, invalids, unemployment, dislocation of families, mental disorders, etc. the EPLF had shouldered the task of alleviating and controlling these problems, and, to this end had drown relevant policy guidelines and designed practical programs which it has been implementing to ensure and safeguard the social rights of workers, women, children and old people the EPLF introduced and improved social laws, formed institutions and achieved tangible results.

The EPLF set up camps and run programs to provide shelter and care for dislocated families and orphaned and abounded children, to cure for and rehabilitate the blind and disabled by war or drought, to aid whose property and livestock were destroyed either by the enemy or natural disaster. The problem was formidable. It was almost impossible for the EPLF to provide shelter, food, water, clothes, and money as well as, education, health and development services to tens of thousands let alone to hundreds of thousands or the whole population. But as the responsibility has fallen primarily on the shoulders of the EPLF, the organization had with courage and determination been doing all it can to ease the problem. Suffice it to note, however, that what it accomplished was only one hundredth of what it would like to do.

The EPLF and Eritrean Relief Association conducted an extensive campaign and made repeated appeals to the international community seeking assistance in the alleviation of these problems. In contrast, the colonial regime which considered the misery and suffering of the Eritrean people a factor that can assist its unjust war, attempted to aggravate the problem by a policy of

continuous bombardment of civilian targets and incessant military campaigns and by resorting to pressure and intimidation in its diplomacy. In spite of the obstacles, many non-governmental organizations and aid agencies contributed substantial aid to the Eritrean Relief Association. But all the aid received amounted to 5% of the need and the problem remained. With regards to the case of refugees, particularly those in the Sudan, noncooperation on the part of the Sudanese government and the UNHCR had denied the EPLF the chance to ameliorate their plight. However, the EPLF’s efforts to repatriate refugee continued. Although the number of those who returned was very small, that was expected to grow with the expansion of development projects and the improvement of the overall political and military situation.

The infamous prison of Nakura