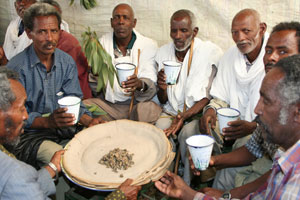 Eritrean farmers spend the whole year, except in the months of January and February, engaged in preparing their land for the coming harvest season.  The activities include preparation of land for cultivation, plough, cultivation, weeding, harvesting and storing products. When they make sure that their products are stored in a safe place and are in abundance they arrange marriages of their sons or daughters.

The months of January and February are months during which farmers finish collecting their harvest and farm products are stored in a secured place and thus they rest and have different festivities mainly wedding ceremonies. These months are dedicated to such activities bearing in mind that they have collected enough crops until the next harvest season and have bounty products to spend for the wedding ceremonies.

In the Eritrean culture wedding ceremonies are conducted collectively. Families that their sons and daughters are getting married are not expected to conduct the ceremony alone. Expenses are shared. Members of the families and friends come to help with whatever they have in their possession. Some provide with crops for food others provide local beverage while others provide money. Hence, wedding ceremonies are family and friends affairs.

Customary marriage rules vary amid the several ethnic groups in Eritrea. Marriages for girls can happen as early as when the girl is fourteen. The families of the couple arrange for the wedding and it is for this reason that practices like dowry price, betrothal arrangements, wedding day ceremony and many more vary between the different ethnic groups.

In many Eritrean ethnic groups, the women do not have the right to choose their marriage partners and they are chosen for them by an elder family member, or a person assigned to arranging the marriage. Participation and

arrangements of the wedding is handled with great care by the families and communities of the groom and bride. During the wedding celebrations, it takes a period of not less than a week for the preparation of food, a month to brew a traditional beer known as ‘suwa’. During the wedding day every one from the village is invited to attend. The invited guests on their part come with different gifts mainly in kind and cash.

In urban areas, wedding ceremonies are becoming westernized.  The ceremony is mainly conducted in big hotels and families do not prepare food at home, it is the hotel owners that handle the job.  And hence, there are fewer jobs for the parents.

This time of the season is hence in which we are expecting more marriages in almost most parts of the country. Every Saturdays and Sundays people are busy flocking to attend wedding ceremonies in different corners especially in Asmara. That will go until the big fasting around March.

Another meeting of regional Administrators conducted