“TALENT IS A RESULT OF A LONG PROCESS” 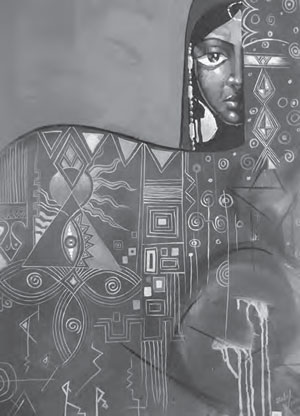 In life nothing makes him happy more than art; he has to paint to feel alive. His name is Robiel Selomun, he was born and raised in the beautiful city of Asmara, which he describes as the, main source of his artistic inspirations.

-Well come! Let’s begin our interview with a little flashback of your childhood. You said that you grew up surrounded by arts, how so?

I grew up with my mom’s family in Asmara which its beauty had inspired me a lot as young artist. Two of my uncles were artists, painters to be specific. And I as kid I couldn’t help but fall in love with the painting tools. That’s how it all started. Till I started going to school I didn’t know that a world outside of my painting room excited. How funny?! I actually remember how school and the kids at school used to amaze me… as if all that wasn’t normal. Later on I started to meet children of my age that had the same tendencies as me. In my early teens my family and I had to move to Massawa and that’s where I actually learned to live independently from art. For some reasons I couldn’t find a chance to paint, even though in my mind all I could ever think of was paint.

Well, after two years I moved back to Asmara and I began to paint again and at the same time I was living outside of my room. I was finally interested in school and I became friends with a lot of my school mates and do a lot of activities with them. Art has always been a privilege to my heart but as I grew I started managing my time very well… I had time for everything.

-What about your painting methods?

Ever since I was a teenager I grew apart from realism, I was and still am a mad fan of abstract and surrealistic art. At first it was a disaster but then in time I sharpened my talent. I have a long way to go but am quite satisfied with what I achieved till now.

-You told us that at school you met young people like you, what happened with them?

I like working in groups, you get to share and learn a massive amount of knowledge. In fact in high school together with a group of my colleagues we started to organize exhibitions with different themes. It wasn’t an easy task though.

-And after high school?

I went to Sawa in 2007 with the 21st round. Sawa to me was practically a bigger high school I met a lot of young people from all over the country. I learned a lot of useful things and I also gained more skills. As a matter of a fact I entered in the completions of the third National Youth Festival and I won the second prize. After Sawa I felt like a man ready for anything that destiny held for me as a person and more specifically as a painter.

-So, what did life prepare for you right after you were done with Sawa?

I took painting more seriously than ever, I started taking courses in addition to that it soon after Sawa that the “byzantine art” started to amaze me. In fact I had an exhibition in 2011 most of the paintings that I exposed then had a byzantine touch to them. The outcomes were really encouraging people actually liked the paintings. In

2012 11 of my colleagues and I got together and threw an exhibition.

Neither. Am following my heart as I don’t stick with a specific drawing method, I follow my imaginations and that’s it.

– Can you tell us how do you plan your future?

Uhm, I know that I have to and hopefully I will grow as an artist. I have a long path to go throw.

-Anything you want to say before we end our interview?

I want to thank deeply from heart and soul, every and single person that supported me trough out my artistic journey.

-Well good luck with everything, we wish you success. Thanks for being here.