The infamous prison of Nakura 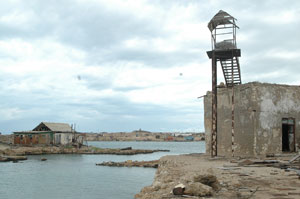 The presence of Italian colonialism in the Dahlak Islands is only felt with the military hardware, unexploded devises and the prison camp in Nakura it left behind. Economically the Italians had no special interest on the islands. In 1892 the Italians established the notorious detention camp in Nakura to detain anticolonial Eritreans and others the Italians felt as a threat to their stay in Eritrea. Nakura Island situated west of Dahlak Kebir is a small island where the Italians thought no one detainee could escape to safety alive. If any one tries to flee the prison camp they were definite that they will be grabbed by the notorious sea or eaten by sea animals like shark.

Nakura is remembered by Eritreans not only for its being an infamous prison where so many Eritrean heroes were condemned to suffer but also by some gallant nationals like Osman Bure who successfully escaped from prison to safety. There are rooms underground, in this scorching heat and long nails protruding on both sides of the tiny wall that the prisoner could not rest on either side. There were numerous chains too.

Nakura as a strategically important place had caught also the attention of the Ethiopian regimes and Soviet Union during their presence there on the side of the Military regime of Ethiopia.

The Soviets in an attempt to reverse the advance of the Eritrean People’s Liberation Fighters used the island for harboring their war ships and for firing heavy artillery to Massawa and its surrounding.

Their attempt was, however, to no avail for the advance of the EPLF fighters was so determined that no force was able to reverse it. The sunken war ships of the Italians and the Soviets are still in the waters of Nakura Island, probably, becoming an alternative of coral reef for the fishes in the area.