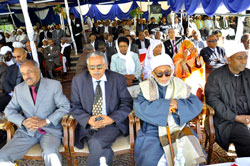 The celebration here in the capital was conducted at the Al-Khulafae Al-Rashidin Mosque in the presence of government and PFDJ officials, religious leaders as well as a number of diplomats and thousands of members of the faithful.

Speaking at the observance, the Eritrean Mufti, Sheikh Al-Amin Osman congratulated followers of the Islamic Faith, and called on them to extend a helping hand to orphans and families of martyrs. Sheikh Al-Amin further wished peace and prosperity to the nation.

Mr. Mohammed Seid Beshir, member of Asmara’s Islamic Awqaf Assembly, on his part gave extensive briefings regarding the historical background of the religious event. Moreover, a number of programs were staged during the ceremony.