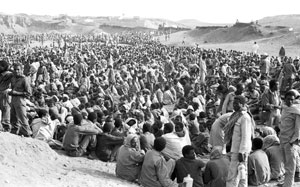 The problem of prisoners of war was another social problem caused by the unjust war waged by the colonial regime. With the intensification and expansion of the Dergue’s offensive starting before the strategic withdrawal, the number of conscripted Ethiopians who have died fighting in the war has reached more than a hundred thousand. Tens of thousands have been disabled. The number of orphaned children and families, who have lost their bread winners, could well be deduced from the above. More than ten thousands Ethiopian solders have been taken as prisoners of war.

The EPLF has clearly laid down in its program its humanitarian policy regarding the treatment of prisoners of war. Although the EPLF’s capacity to provide shelter, food, clothing and medical service to POW was limited, it has accorded them the same subsistence living that it provided to its members. The EPLF has worked vigorously and made many contacts with governments and organizations, particularly with the International Committee of the Red Cross (ICRC), which claims to be responsible for them to find a fundamental solution to the problem. On the other side, the Dergue has disowned the POW’s and denied their existence, claiming “there are no prisoners of war, only traitors” and has tried to prevent governments and organizations from raising the issue and providing assistance, thus obstructing the solution of the problem. The ICRC has created obstacles. Cowered by the intimidation of the Dergue, it created lame excuses, attempted to get involved in political and security matters which were none of its concern and had failed to contribute anything. When the EPLF proclaimed the freeing of 3000 POW’s in 1981 and requested assistance, the ICRC refused to cooperate, bowing to the threats of the Dergue which claimed “The EPLF is releasing POW, because it is afraid of the Red Star offensive………and wants to redeploy the fighters who were guarding the troops. If the ICRC cooperates it would mean that it has chosen to collude with EPLF.”

Although the problem of POWs required external assistance, the EPLF had single handedly discharged its duty with respect to the POWs in spite of the obstacle created by the Dergues and others, because it recognizes that

the easing of their lot was its responsibility. Providing food, clothing and other services although imperative was not a fundamental solution. To bring the war to an end, it was necessary to arouse the people of Ethiopia against the war and to strengthen the Eritrean people’s solidarity with the peoples of Ethiopia, waging the struggle in the

military and other fields. The EPLF, therefor, adopted the politicizations and education of the POWs as one of its task, as they constitute a part of the Ethiopian people, and were primary victims of the unjust colonial war. The ex-prisoners of war who have joined the ranks of the EPLF and are active in all fields of struggle and those who had joined Ethiopian opposition organizations were fighting against the Dergue proved that the political education program conducted had heightened the consciousness of the POW. Aside from political naivety, another weakness exploited by the Dergue was illiteracy. The EPLF had therefore an ongoing educational program aimed at making the POW literate; knowledgeable, self-supporting and capable of serving their poor people. All POW were able to read and write and many had advanced beyond the first stage of literacy testifying to the success of this program. Their participation in work, besides making a significant contribution to the liberation struggle and the upkeep of their health, was a program which enabled them to acquire and upgrade their skills. As the result many become skilled in building and other trades. Spiritual or psychological pressure was another problem faced by the POW. Confinement and alienation from family, people and country created psychological problems. To alleviate these problems, POW were encouraged to engage in sports and cultural activities and to write and transmit via radio voice of the Masses message of hope and encouragement to their families and to each other. They produced good results. The EPLF made many attempts to release the POW. Although some have been released, it has been necessary to keep the release POW as free men in the base area. The Dergue’s policy of imprisonment, repression and conscription and the establishment of  “Kebeles” as police instruments had, as proven by experience, made it almost impossible for the prisoners to return to their villages and resume a peace full life. Many who tried were forced to return from Ethiopia to the EPLF. Aside from its humane treatment of POW the EPLF had been facilitating the departure of deserters from the Dergue’s army to destination of their choice, which mostly happened to be foreign countries. Although many individual and group attempted at escape and organized sabotage by POW were experienced initially, these were decreased with the competent handling and politicization of the prisoners. One unsolved problem was the regimes continuous aerial bombardment of prisoners of war camps, which the EPLF tried to minimize by frequently moving the camps.

Peace in the battle field of the mind